Welcome to our 30th Tumblr Tuesday, where every Tuesday we celebrate our love of Tumblr by interviewing the mastermind behind a new blog. Tumblr, a New York City based startup, is like the FFFFound for the rest of the world. It’s as shareable and fast-paced as Twitter but populated with more inspiring text and rich images.

In April, we reported that Tumblr receives 15 billion page views each month from its 50 million hosted blogs! But Tumblr’s founder and CEO David Karp admits that one area the blogging network hasn’t performed well enough at thus far is content discovery – which is what our weekly column Tumblr Tuesday is all about.

For this week’s interview, we caught up with Ann Friedman, the executive editor of GOOD magazine and the curator of LadyJournos. Friedman has had a long, prestigious career in media, starting out as a reporter for local newspapers in Missouri and Iowa and becoming the deputy editor of The American Prospect before joining GOOD.

With all her daily, monthly and quarterly wisdom as a writer and an editor she launched #Realtalk from your Editor at the end of April, a witty Tumblog that characterizes the realities of an editor in funny gifs and punchy headlines. Learn more about Friedman and her musings here. 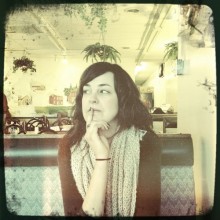 CBM: Tell us a little bit about what your life is like in Los Angeles?

Ann Friedman: My life is GOOD (as in, I work all the time), and it’s also good (as in, wonderful). I get to collaborate with a phenomenal group of writers and editors and designers to make a daily web magazine and a quarterly print magazine. My job is creative and challenging and fun. One thing I love about living on the best coast, though, is that people here look at me like I’m nuts when I tell them the hours I work. I need that! In New York and DC, everyone’s working crazy hours. It’s also nice to be a little removed from the New York media scene. And the 75-degree weather and sunshine and coconut kale smoothies don’t hurt.

AF: 10. I work with the best people, in one of the best cities in the world. I get paid to manipulate words. Everything rules.

AF: I love the point in the editing process when the heavy lifting is done, the structure is sound, and the writer and I are making decisions about which details to draw out, which paragraphs to shuffle around. Few things are more fun.

I hate it when I end up spending the bulk of a work day on the non-editing part of my job– the budgets, the meetings, that sort of thing. The best days are the ones that are all editing and assigning and writing.

CBM: Is there a gif on the site that you relate to more than others?

Being an editor is getting paid to judge.

CBM: What was the apple on the head moment for this Tumblr?

AF: A few weeks ago, on deadline for our summer issue, a writer filed several days late. I replied to him on gchat with this gif. Later that night, in a bout of 3 a.m. deadline-panic-induced insomnia, I made the first 15 or so entries on the blog. I have a significant gif arsenal, so the ideas come pretty easily.

CBM: The Observer wrote a story about your Tumblr and your “coming out”? Love your gif reaction. Were you anonymous on purpose prior to that? If so, why? And then why did you choose to “come out”?

AF: At first it just didn’t occur to me to put my name on something I made in the middle of the night. I make all sorts of weird Tumblrs (such as this snacks-based version of Marry/Fuck/Kill) that I abandon after a few months. And honestly, I thought the #whatshouldwecallme meme was past its prime. But then the site took off, and my personal brand manager convinced me I was a fool not to claim it.

CBM: What was your first job in media?

AF: I did several newspaper internships during college, but my first magazine job was a fellowship at Mother Jones. It was such a great introduction to magazine journalism.

CBM: Do tell us a bit of detail on your day to day…

AF: I wake up, reach for my phone, and scroll through the news and Twitter while holding it inches from my myopic eyes. Sometimes I’ll do a bit of editing or emailing on my laptop from bed. Then I head into the office, where my days are a combination of emailing with freelance writers and discussing ideas with our staff writers and editors. I’ll have a meeting or two about upcoming article series or packages, or perhaps a check-in with our sales team. Lunch usually means a stroll to the food trucks. We’ve got a daily 3 p.m. edit meeting where we nail down the next day’s content. Late afternoons are usually all about editing. Almost every day ends with a nice whiskey. Because I can.

CBM: If you could have any job in the whole wide world what would it be?

AF: In a job interview I was once asked what Ann Magazine would be like. Ever since, I’ve thought about starting my own magazine. I’d give it a better name, though.

WHEN SOMEBODY ASKS HOW I LIKE WORKING FOR A MAGAZINE BASED IN L.A., NOT NEW YORK