This week’s Tumblr Tuesday takes a slight deviation from our usual focus in a number of ways. Firstly, it is written by me not the lovely Courtney Boyd Myers, and secondly because it is focused on Asia (China to be precise), where we are exploring the limitations of speech on social media in the world’s most populous country.

The overwhelmingly majority of China’s 500 million Internet users live in quite a different cyberspace to that which we are accustomed to in the West and other parts of the world, and this interviews follows on from a recent look at those restrictions.

Last month, we brought you word of an interesting blog that gave insight into the type of terms that the Chinese government blocks on the country’s Twitter-like ‘Weibo’ (“way bore”) services with its ‘Great Firewall‘ system.

Microblogs are hugely important and influential in China, not only do half of the country’s Web users use them, but the government actively cracks down on it. Indeed, just last week, it froze the comment feature on Sina Weibo and Tencent Weibo following large-scale speculation of a political coup. That gives an idea of how significant its effort blocking terms on Weibo services is.

Today’s installment of Tumblr Tuesday is with Jason Q. Ng, the author of the Blocked On Weibo blog, who shares his thoughts on a number of topics.

So read on if you’re interested in censorship in China, being inspired by history and are curious about how Chinese Internet users view censorship and, most importantly, how Jason developed a new appreciation of bacon.

TNW: Can you give us some background on yourself and what you’re currently doing?

JQN: I’m currently an East Asian Studies graduate student at the University of Pittsburgh. After graduating from Brown with an English degree, I worked in New York for four years as a book editor (my favorite project would have to be this adaption of Studs Terkel’s ‘Working‘ by the late and great Harvey Pekar).

I still keep in touch with a lot of folks I used to work with, and I just finally finished up editing a book I acquired years ago titled Two Billion Eyes, a fascinating inside look on China Central Television, the state television network of China.

I don’t have any concrete ideas of what I’ll be doing in the future, but I imagine books and writing will play a major part in it.

TNW: What inspired you to start the blog, and why did you pick Tumblr for it?

JQN: It all started with a stray comment that a professor of mine, Pierre Landry, made about how you can use Google Trends to actually see the effects of the Internet being turned off in Xinjiang, a province in China that has a lot of tension between the native, predominantly Muslim population and Chinese authorities.

I was familiar with the story about how China basically threw the Internet kill switch over the entire region after riots there in July 2009, but to see it in such stark visual form triggered something inside me. I figured there must be other data out there that could be mined in similar fashion, so I concocted a scheme to test every word in China’s Wikipedia — which contains roughly 700,00 terms — to see which ones might be censored.

I consulted an old friend of mine, Adam Saponara, to make sure the idea was feasible, and after he helped me nail the foundation down conceptually, I then locked myself in my room for a weekend, learning just enough Ruby to get by, and tinkered with this computer script until it worked.

As for where to put the words I uncovered, Tumblr was a pretty obvious choice. Like most folks, I chose it for the sheer simplicity of use and the social aspect. I’ve used all sorts of other blog and content managers (I was one of those kids who was “blogging” on Geocities before blog was a word) and Tumblr is by far the most fun.

Every once in a while I’ll butt up against some sort of limitation that’ll frustrate me, but I guess that’s the beauty, how simple it is.

TNW: How much time do you spend researching words and developing content for your blog?

JQN: Uh, 3 months? Just kidding, that’s how long it took to test all the words. I don’t know, I guess it depends. I try to tailor each of my explanations for someone who’s curious about China but may not know much about its history or culture.

If it’s a subject I’m somewhat familiar with (like say the anti-censorship software Ultrasurf), it might take me 15 or 20 minutes to pull together some links and write it up. If it’s a more complex topic or one where I’m trying like mad to figure out why in the world it might be blocked (like my post about “hair bacon,” aka Mao’s embalmed corpse), it could take several hours. I’m still not 100% sure that Mao bacon post is right, but so far no one has offered a better answer so I’m sticking with it.

Recently, I’ve been getting a lot of tips from new readers of the blog that have been very helpful with deciphering some of the more obscure blocks, for instance the Cyrillic character  ҉   and the Chinese phrase 四君子 (“The Four Gentlemen“). So if you have corrections or information you want to add, please do contact me.

From researching the words to getting feedback from readers, this whole process has been such a great learning experience.

TNW: What are your favorite terms that are blocked in China, and why?

JQN: Haha, well the Mao bacon one would have to be up there. The Hoobastank one made me chuckle deeply until I realized they weren’t blocking the band but rather the word “stank” (and strangely, not the word “tank”).

I guess my personal favorites to research and look up are the names of activists, dissidents, and others who’ve challenged the authorities in China, often to great harm to themselves. It’s sounds strange calling these words my favorites since I don’t get pleasure per se from knowing they exist, but they do make you think and reflect.

For instance, reading about Xu Qinxian, the army general who refused to order his troops into Tiananmen Square and was later imprisoned for it, was heartbreaking and inspiring at the same time.

Don’t get me wrong; I love China and it pains me every time someone ignorantly uses it as the punchline to a “Look at how crazy these people are!” joke. China doesn’t get enough credit for the incredibly positive and successful transition from where it was during the depths of the Cultural Revolution to where it is today, but even with such progress, there are still some pretty sad flaws in the system.

TNW: The blog is filling a void by providing intelligence on censorship, do you have plans to expand the scope of your research?

JQN: This site started as an amusing little side project, and right now I’m only tracking what one Internet company thinks is sensitive. But I imagine it might be interesting to know what other companies in China censor as well, so I’ve started to work in that direction.

As for involving other people with this, absolutely, it would be great to have real-time monitoring of Weibo keywords the way GreatFire.org monitors website connectivity in China, although China Digital Times’ crowdsourcing project comes closest to this. I’ve thought about ways to do it, but my bedroom certainly doesn’t have the resources to pull it off. However, if others have ideas, I’d love to chat.

Since we chatted, GreatFire.org has linked up with Jason and used his research as the basis for a ‘library’ of terms that are blocked on Weibo services, which can be found here.

TNW: How do you see the Great Firewall continuing going forward? Can China sustain the barrier as the Internet continues to expand and provide more information and access worldwide?

JQN: That’s nearly impossible for me to answer. I’m not an Internet scholar like Guobin Yang, Tim Wu, or Rebecca MacKinnon, and there are many folks who are so much more knowledgeable about the relevant cultural, political, and technical issues at play here, for instance Jeremy Goldkorn, Charlie Custer, and the teams at China Digital Times and the China Media Project. That’s not to mention all the Chinese netizens who know better than anyone how things are shifting online.

The rise of microblogs in China has been fascinating to watch, and as of right now, I’d have to say it looks like the netizens are winning. That Gilmore quote, “The Net interprets censorship as damage and routes around it” is happening right in front of our eyes, and seeing how creative online users in China are at working within the system is just awesome.

That said, China has a legitimate case for wanting to control its transition to a more open society (if that is indeed the goal); can it continue to do so in the heavy-handed manner that it does so today? Probably not. But it’s almost scarier to consider what kind of new methods China will develop for regulating the Internet in the future.

You almost prefer things the way they are now because at least there are obvious ways around it.

Modest Jason recently appeared as a panelist for Asia Pacific Forum, where he was joined by Rebecca MacKinnon.

TNW: What attitude do you think Chinese Internet users have on censorship? Are they itching to get out or content with what they have? 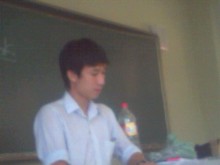 JQN: Again, I’d hate to speak on behalf of Chinese Internet users since I’m not one of them. But based on what I’ve read, the population of folks who desire Internet freedom in China is much greater in number than those who desire wholesale political change in China, though the two aren’t mutually exclusive.

This is a country where arguably the most vilified person online is not someone in the Chinese central government; instead, it’s the “architect” of the Great Firewall, Fang Binxing (incidentally, his name is no longer blocked on Weibo but most references to the Great Firewall still are).

So yes, based on the vitriol he receives online (and off–someone once hit him with a shoe while he was giving a lecture and became a folk hero for it!), I think Chinese netizens are itching to have the same Internet freedoms as we have here in the US and elsewhere.

You can keep up with Jason by checking in with his ongoing work at the Blocked On Weibo blog, following him on Twitter — where is he @jasonqng — and reading his contributions to Waging Nonviolence.