Tumblr will get its first analytics platform, its marketing and revenue consultant Rick Webb announced today on stage during his keynote at Advertising Week’s OPS conference, alongside Union Metrics‘s CEO, Hayes Davis.

As a matter of fact, the app was built by Union Metrics on the Tumblr firehose, and is the first tool of its kind to be officially endorsed by the micro-blogging startup.

As you may know, Union Metrics is the social media analytics company behind TweetReach, which provides Twitter tracking data (see our recent story). To expand its reach, it has has licensed access to Tumblr’s entire firehose through social data company Gnip.

According to Tumblr, Union Metrics’ new app will help brands and marketers make sense of the vast amount of data created by its user community – Tumblr currently hosts more than 75 million blogs and 32 billion posts, with over 70 million new posts being posted each day.

In practical terms, Union Metrics for Tumblr lets brands and content owners filter data to track a specific blog or post, as you can see on the screenshot below.

Users can also track a topic that goes beyond their own content, an interesting monitoring tool for companies and brands.

In addition to top tags, the platform also helps Tumblr users understand which type of posts are the most popular, while showing how engagement levels and trends have varied over time. 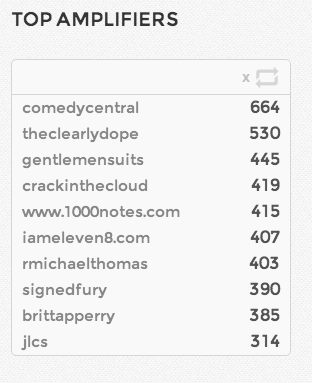 To identify influential contributors and curators, it also includes a list of a blog’s “top amplifiers.” While this is always interesting for bloggers, this feature is mostly targeted as brands, to which Tumblr is increasingly selling its platform as a way to engage with online users.

This also reflects the fact that Tumblr is confident on what it has to offer to advertisers. “We’ve been thrilled with the success brands have had using Tumblr to tell their stories; now we want to help them measure the impact,” Webb said.

Yet, this isn’t all about marketers, as Union Metrics’ reblog tree will also please data visualization fans.

Union Metrics for Tumblr is available today by invitation only, but the companies promise that it will soon be open to the public. In the meantime, you can sign up for an invitation via Union Metrics’ site.