Emerge Media’s Translate.com has launched its apps for iOS and Android in a bid to help users crowdsource translations on mobile in more than 75 languages. 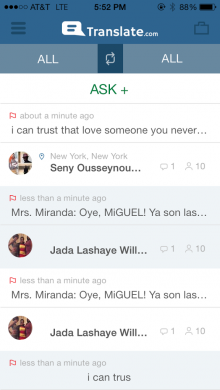 After acquiring Translate.com a year ago, Emerge Media has since grown the site five fold to over 2 million users, CEO Anthos Chrysanthou said in an interview. He went on to describe the company’s goal with its new apps as similar to what Waze did with crowdsourced traffic data. Just as driving directions have multiple routes, there are many ways to translate a sentence.

“For the first time we’re socializing the translation experience, he said. “We want to be everyone’s personal translator.”

Language learning platform Duolingo is also taking a crowdsourced approach to language by tapping the community to expand the number of languages it offers, but it’s not directly focused on the translation space.

With giants like Google and Microsoft also tackling the translation problem, Translate.com has a tough job ahead. However, Chrysanthou said that the service’s social component gives it a fighting chance.