Titanfall launched earlier this week with a year’s worth of hype behind it and was received with much excitement from the gaming community. Gamers flooded online as it launched at midnight in the US, taking the game’s dedicated servers offline seemingly immediately.

Call of Duty changed the way we thought about first person shooters and Titanfall comes from some of the greatest minds that birthed the original franchise at Infinity Ward. Developer of Titanfall, Respawn Entertainment was born with ex-senior executives Jason West and Vince Zampella from Infinity Ward at the helm.

Titanfall is Respawn’s first self-created title, which is an attempt to break the mould of paltry, mediocre updates to shooters that don’t do much more than change the graphics around every year. 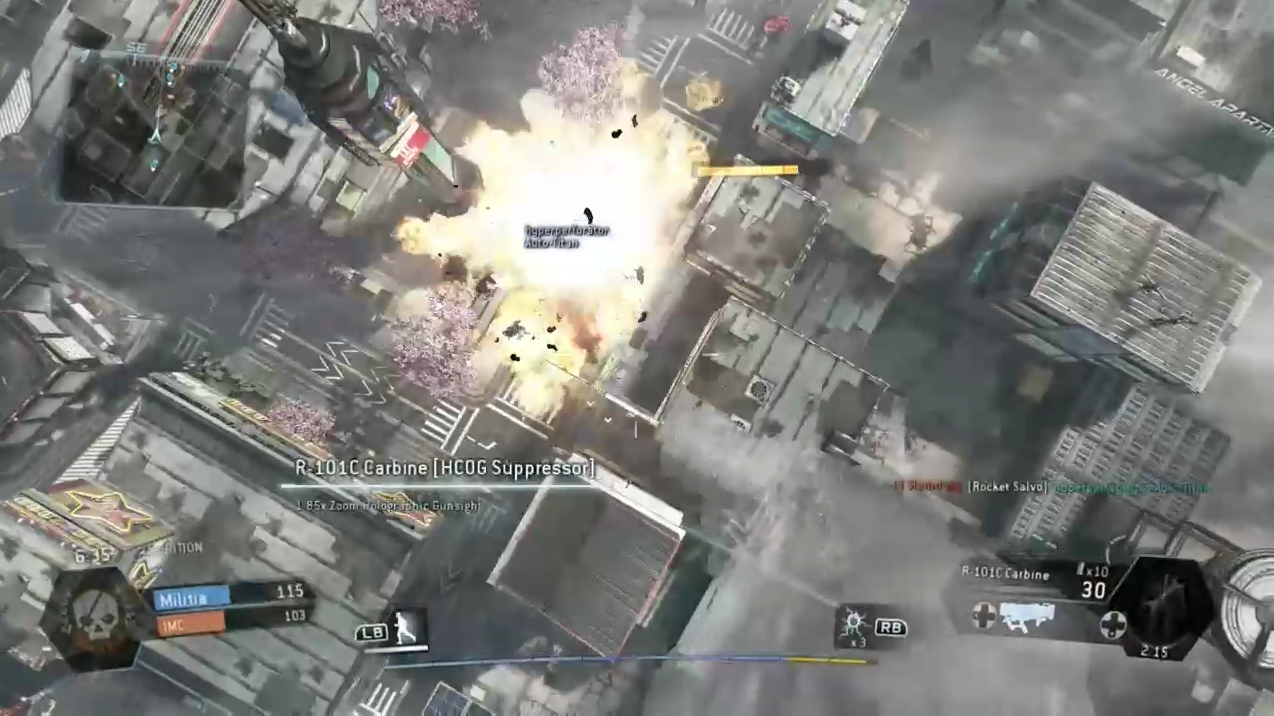 What suddenly dawns on you is just how easy it is to make complex maneuvers across the battlefield; vaulting over objects, running from wall to wall of opposite buildings then quickly jumping from the rooftop into the window of the building next door. It’s fast paced and addictive already at this point, but this is only the beginning.

As you fight your way through the shooter, there’s a countdown clock on the lower right, that tells you just how much time until your Titan mech-unit is ready for use. When you complete challenges or make groups of kills on the battlefield, this time reduces rapidly. Suddenly, the message ‘Titan ready’ is plastered across the screen.

From your perch, you look to where you want your Titan to land and call it in. A green landing zone appears and a 5 second countdown starts above it; you look up and see a meteor-like object is quickly falling from the sky.

Exploding as it breaks into the atmosphere, the titan hits the ground with a massive thud. You jump from the roof onto the top of your Titan and hold the enter button and suddenly you’re thrown into the cockpit of a giant war robot.

One would think that being in a giant, powerful Titan would make the game unbalanced, but perhaps that is where the magic of Titanfall lies. Suddenly, you’re a big target; not only does everyone on the battlefield have an anti-Titan weapon that’s extremely powerful, others in the game are likely in Titans at the same time. Everyone is out to kill you.

What happens next is a non-stop battle to stay alive in a rapidly deteriorating Titan; quickly firing rockets and heavy machine guns at other Titans and pilots on the field to try and deflect some of the fire.

But often it’s over quickly as you find yourself cornered with two other Titans taking you down. The robotic voice suddenly warns that the Titan has “gone critical,” then screeches “eject, eject, eject” while you mash the controller to quickly evacuate the Titan.

You’re propelled straight up and out of the Titan, to safety (or so you thought) but the action even continues in the air, especially if you’ve just doomed another Titan and there’s a pilot falling with you.

During our time with Titanfall, we witnessed lots of firefights unfold in mid-air as pilots fought to stay alive and died many times ourselves trying to survive ejections. You can even set your Titan to detonate its nuclear core when you eject, decimating anything standing in close proximity.

The action literally never stops and it’s what makes Titanfall so compelling. The speed at which events unfold, the fact that  that your Titan has exploded and you’ve ejected to safety, it’s not safe at all.

When you actually die, you find yourself mashing the respawn button to go again and are instantly thrown back into the action. It’s like a drug and even those that find themselves dying over and over again (like myself) will actually thoroughly enjoy the game’s mechanics; it may be the only game where dying didn’t constantly frustrate me or make me want to stop playing.

Titanfall is great for those that don’t enjoy first person shooters, because it doesn’t feel like you have to be a pro-gamer with skills to no-scope enemies from across the field. The controls are intuitive and responsive and your pilot is fast and nimble, giving you the power to quickly learn how to use the Titanfall world to your advantage.

The wall-running and quick sprinting mentioned earlier is quite freeing, giving a lot of freedom to navigate the map very quickly and actually ruins other shooters after you’ve played Titanfall for a while; Call of Duty feels slow and cumbersome and Halo feels like a child’s game.

Titanfall is a first-person shooter like no other; it borrows elements from other games in a range of genres and rather than just reproducing them, Titanfall takes these influences and combines them into an addictive, non-stop, heart-racing game.

Elements such as the ability to wall run between buildings and to quickly scale buildings were inspired by Mirrors Edge/Assassin’s Creed, the giant war robots were likely inspired by Mechwarrior as well as the classic, rapid FPS facedown style which was inevitably inspired by Call of Duty are all mixed in.

The combination is perfectly balanced, creating a fast-paced shooter that’s eerily similar to Call of Duty but completely unlike anything you’ve ever played.

Even after hours of play, the game continues to thrill with a Plethora of options and ways to take down a Titan. You can jump on the back and ‘rodeo’ a Titan to death or fire rockets from afar, but you’re always one-step away from being shot by a pilot or being squashed by a Titan.

Unfortunately, Titanfall isn’t without some problems. For the purposes of this review, we played the downloadable version of Titanfall on an Xbox One and while it ran at 60fps for the most part, the game starts dropping frames when more than two or three Titans are on the screen. It’s disappointing that “next generation” consoles can’t handle this.

Perhaps it’s the way the game was built, or because DirectX 11 isn’t fully optimized for the Xbox, but it’s a bit disappointing that Microsoft’s flagship console isn’t up to the task. It’s not unplayable and your average gamer likely won’t actually care about this, but hopefully it’s something that can be addressed in a future update to the console.

There’s also the lack of any type of single-player mode in the game which could be an issue for some. For myself, this isn’t an issue as I see the value in Titanfall being entirely locked up in the online play of the game – it simply wouldn’t be as enjoyable without the human element. It’s engaging, with enough variety that you don’t get bored of playing, despite the lack of a real campaign mode.

I could see Titanfall becoming repetitive for many over time, but I’m optimistic that the DLC that’s planned for later this year will help bring additional depth to an already excellent game. All of this said, Titanfall has single-handedly revived my interest in gaming and the obsession with playing has lasted longer than just a few days this time.

Titanfall is the game the Xbox One desperately needed to help sell the console as a real winner. Since it’s exclusive to PC and Xbox One right now with Xbox 360 support coming later, it should help convince potential customers of the console’s potential as a gaming platform. Titanfall’s release feels similar to how Halo was before it went on to help the Xbox 360 dominate the last console race.

If you were to buy only a single game in 2014 and have to play it for the rest of the year, I would wholeheartedly recommend Titanfall. It breathes life into a stale FPS genre and combines game elements from across genres into a near-perfect game that you won’t be able to stop playing.

Titanfall marks the beginning of a significant new era of first-person based games. It sets the bar impeccably high for other studios to match, one which may be unbeaten for some time.