This article was published on February 15, 2014 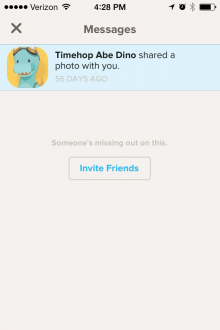 Timehop has released some updates for its social media memories iOS app. Included in version 2.3.2 are some nondescript bug fixes and an easier way to share to Facebook, Twitter, and Instagram. In addition, the company has removed Timehop Messages, its in-app messaging system, citing low usage.

We asked company co-founder and CEO Jonathan Wegener about the removal and he said that it was to make way for future product innovation. It turns out that “fewer than 1 percent of users” were sending messages to one another and Timehop felt that there were better opportunities for the wasted resources. Wegener says, “We want to keep the app focused and easy to use. Feed the winners, starve the losers!”

There’s no plans yet for a replacement system, but Wegener says that the community has been creating its own makeshift system — taking screenshots of their time capsules and sharing them via SMS. In the future, Timehop will have some new social features to help with sharing, but they will look very different from what’s currently being used.

For those of you who want to use Timehop but aren’t using an iOS device, Wegener tells us that an Android version is expected to be released later this month or in early March.