Today at a Goldman Sachs Technology and Internet Conference, Apple CEO Tim Cook gave a keynote presentation in which he addressed working conditions at Apple’s factories in China, as well as the product philosophy of Apple.

One of the big questions related to the iPhone was whether Cook felt that the iPhone would succumb to the ‘law of large numbers’, meaning that perhaps the market for the product would diminish. To that end, the moderator asked a question about emerging markets for the iPhone and iPad.

Cook addressed offering these devices in areas like China, Brazil and other locations where the subsidy model simply didn’t work.

“We want to focus on…making the world’s best product…the paramount thing is the product, it is the focus,” said Cook.

Cook cited the growth of the Mac revenue from $1.2B in sales in China and other emerging markets pre-iPhone launch to $13B last year.

“It’s on a trajectory that’s off the charts,” Cook said about the iPad. “The iPad has stood on the shoulders of everything that has come before it.”

Cook also mentioned that they had begun using the iPad at Apple internally before its launch. He said that he quickly began using it for 80-90% of his own work. This is why he feels that the tablet market will become larger than the PC market, saying that it was “just a matter of the time it took.”

“It’s too much of a profound change not to,” concluded Cook, joking “that’s just my opinion, you’re free not to agree with me.”

When speaking about cheaper tablets, Cook said that if you take a crappy tablet home, you’ll find that the “joy is gone” soon after getting it home. “The joy is gone every day that they use it until they aren’t using it anymore,” said Cook. “You don’t keep remembering “I got a good deal!” because you hate it!

“As long as people invent their own stuff, I welcome the competition,” Cook said, referring obliquely to the ongoing legal battles that Apple is undergoing with its rival Samsung over the similarity of its tablet designs.

The somewhat jovial CEO went on to address the fact that the tablet market was indeed cannibalizing PC sales, but said that Apple would rather cannibalize its own business. He also said that he was not predicting the demise of the PC industry and said that tablets and PCs would both benefit from the competition. He said that the tablet industry would absolutely sell more units, but that didn’t necessarily mean that PCs would be going away any time soon. 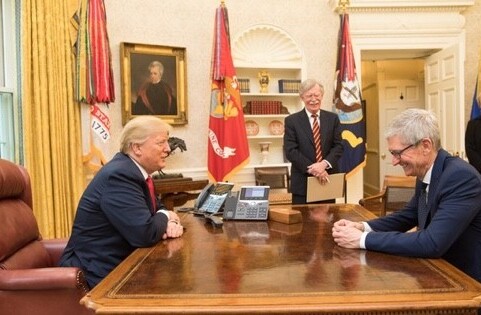