TLDR: Go back to one of the best fighting games ever made with the amazing Street Fighter II: Champion Edition X RepliCade, now only $99.

Back in the early 90’s, if you were a hardcore gamer, then Capcom’s Street Fighter II was likely one of your games of choice. One of the elite fighting games of its generation, the game was a major factor in the revitalization of gaming after the 80’s boom and still stands as one of the most popular games of all time.

Now, you can relive those arcade glory days or check it out for the first time with the incredibly cool Street Fighter II: Champion Edition X RepliCade from New Wave Toys, currently $20 off, just $99 from TNW Deals.

This game is a faithful replica of that classic video cabinet game, only in 1:6 scale. Yep, it looks exactly like the game at your favorite arcade back in the day, including the painstakingly reproduced wood cabinet, illuminated marquee, cabinet accents and more, but it’s only a foot high.

But even in this portable state, this Capcom-licensed unit never compromises on gameplay, utilizing fully playable original controls and running the original game ROMs.

Of course, everything comes with a little something extra nowadays. So in addition to Street Fighter II: Champion Edition, the cabinet also comes loaded with Super Street Fighter II Turbo for more game action. You’ll also get a separate miniaturized fight stick control panel with a bat-top joystick and action buttons in case you want to play, but don’t want to hunch over the cabinet.

Perfectly sized to sit comfortably on a desk, bar or bookshelf, it’s a great conversation piece in addition to being a heck of a lot of retro-gaming fun. 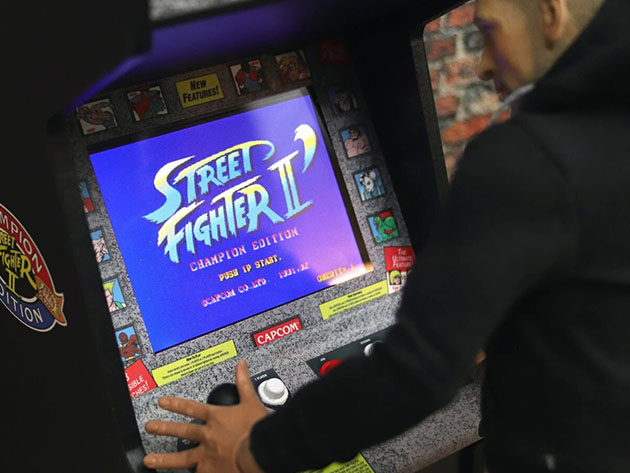