As Mexicans voters prepare to vote this Sunday to elect their next President in a troubled context, a new gaming app called “Guerras Electorales” (Electoral Wars) takes an ironic stance on this hot topic.

While its design is relatively simple to work with all kinds of mobile devices, the impact of ‘Guerras Electorales’ relies in its concept: each gamer represents a fictional political party, and has to use all sorts of dirty tricks to win the election. When the game starts, you get a certain amount of money that you can spend on these before the end of the day to make sure your candidate will win. Among other things, you can buy votes, pay people to spread rumors, create fights at the polling stations and engage in ballot stuffing. 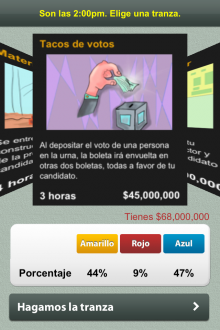 Some of the game’s actions also have colorful names, such as the “vote tacos” (to hide ballot papers) and “tamaladas” (to offer food in exchange for votes). Unfortunately, these fishy maneuvers may be fun, but they aren’t inventions, and all belong to Mexico’s not-so-distant past.

‘Guerras’ was developed by Roberto Ibarra, whose development studio Innox is already responsible for No Te Pases, a mobile app that uses a clever trick to help Mexicans keep their mobile bills under control. The winner of App Circus’ competition in Mexico, it was one of the Mobile Premier Awards‘ finalists in Barcelona last March. As for Guerras Electorales, it will soon be presented during the next edition of App Circus in Mexico City.

According to Ibarra, his purpose is both to denunciate and educate on these bad practices. As he points out, 7 million Mexicans will vote for the first time this weekend, and may not be aware of these shady techniques, especially young voters. While fraud doesn’t take place in the open anymore, it is believed it may still happen, and vigilance is the best way to prevent any irregularities.

As a matter of fact, this electoral campaign was particularly tense – not only because of the current wave of narco-related violence and of the threat it represents for the media, but also because of the political parties themselves. As MIT Technology Review recently reported, the top contenders have engaged in a Twitter spam war, in which they are all suspected of buying armies of Twitter bots to attack their opponents.

While this is a shame, it is also comforting to see these attempts get reported and condemned. More generally, one of the most interesting trends over the last months was the emergence of public calls for democratization, transparency and freedom of the press, exemplified by the protest movement “Yo Soy 132,” sometimes described as “the Mexican Occupy movement.”

For the Mexican entrepreneur Jorge Soto, this protest may not have a huge impact on the vote itself. Yet, he is hopeful that its message may be canalized to change the way Mexican governments are ruling the country, which he describes as a tremendous challenge.

In the meantime, the election-monitoring tool Soto has created will be of great help. Initially known as ‘Cuidemos el voto,’ it has now evolved into ‘Observacion Electoral 2012,’ a UNDP-supported platform that lets Mexican citizens keep a watchful eye on the election process – and report the very same fishy practices “Guerras Electorales’ humorously criticizes.