Tech conferences are so commonplace now that barely a day goes by without another event focused around startups, developers, or Web culture being announced. In such a competitive market, it can be hard for organizers to attract the caliber of speakers and volume of attendees to make an event worthwhile. Thinking Digital has been beating the odds successfully, if rather quietly, by putting on an event of exceptional quality for five years now. This year’s event, which took place this week, was no exception.

Billed as “an annual conference where the world’s greatest thinkers and innovators gather to inspire, entertain and discuss the latest ideas and technologies,” you may expect Thinking Digital to take place in San Francisco, New York or London. But no – its home is Gateshead, a town in the north-east of England, just a couple of minutes’ walk across a bridge from the city of Newcastle-upon-Tyne.

Despite its perhaps unexpected location, Thinking Digital manages to attract international lineups that rival the legendary TED conferences. Take this year’s event, for example; the bill included, along many others – former Apple creative director Ken Segall [watch our interview]; Mikko Hypponen, one of the world’s leading authorities on cybersecurity [listen to our interview]; Christen Duong, product lead at Foursquare; Ralph Rivera, the BBC’s Director of Future Media, and Professor Sugata Mitra, who inspired all with his tales of innovative approaches to IT education in India.

Less obviously techie, but equally inspiring and enjoyable, talks came from the likes of Pam Warhurst – who charmed everyone with her tale of improving the environment in her home town of Todmorden – just getting out there and doing it without worrying about getting permission, a useful story for any entrepreneur, and Dr Jennifer Gardy, whose passion for microbiology and diseases was – forgive the pun – infectious. Her A-to-Z of Epidemiology is well worth a watch.

Over two days (plus a half-day ‘University’ event featuring panel debates – I took part in the startup strand), Thinking Digital kept attendees gripped to the talks in a way rarely seen at tech conferences. There was very little of the ‘staring at laptops and iPads rather than listening’ habit that often blights such events – these talks deserved, and received, attention. 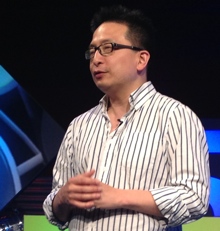 So, what makes this such a unique event? Ask regular attendees and one name will keep coming up – Herb Kim. This New Yorker relocated to the UK in 1997, and despite having lived in various parts of the country since then, has become an important part in the north-east’s technology community. His main role is as CEO of Codeworks, an organization that began with public money but has since continued to play a strong supporting role to the region’s digital industries and to its promising, emerging startup scene despite having to become a self-sustaining entity.

Kim has developed a reputation for being able to bring together inspiring speaker lineups – not only at Thinking Digital, but at TEDx events across the north of England too. Of course, he doesn’t do it all alone and has a solid team working alongside him, but his reputation led him to gain a place in Wired UK’s Wired 100 list last year, and the Media Guardian 100 in 2010.

Thinking Digital flies a flag for the north-east, with a conference of truly high quality. Its venue – the impressively glass-and-metal-lined Sage, named after the accounting software giant based in the region – sets it apart from similar conferences that too often take place in dull hotels or unremarkable convention centers.

Many of the attendees at this year’s event were regulars, having come back repeatedly over the past half-decade. That speaks for the event’s quality but also perhaps highlights a problem. Thinking Digital certainly has a strong reputation amongst those who know it; despite this, it doesn’t feel like it’s quite as well-known as it should be. It attracts people from across the north of England and seemingly to a much lesser extent from my conversations with attendees, the rest of the UK and abroad. This is a shame, as it’s certainly good enough to pull much more of a non-local crowd.

I was also surprised to discover that I was the only member of the tech press in attendance this year, which seemed to speak volumes about it needing to be better known. Sure – no big news was broken at the event this year but in terms of inspiring talks and conversations with interesting people, it was the best I’ve experienced in the UK, and I’d recommend a few more journos make the trip next year.

See you there next year?

All photos by Leah Pattem, except Herb Kim and header image, by Martin Bryant.