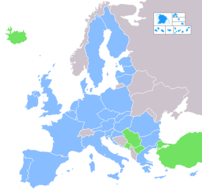 Image via WikipediaSocietas Privata Europaea (SPE) is a proposed EU-wide company type designed specifically for small to medium sized companies to operate in EU member countries, which could be enacted as soon as 2009. This is a core part of the Small Business Act for Europe, which the European Commission unveiled at the end of June, based on ten guiding principles and proposing policy actions for both the Commission and Member States.

Here are some of the headlines in what is being planned:

The press release begins with the wonderful phrase “a step towards a Europe of entrepreneurs, with less red tape and more red carpet for Europe’s 23 million SMEs“. [English Version] [Dutch Version] A set of Frequently Asked Questions also helps to explain the benefits of this initiative.

The lawyers, accountants, international tax experts, company formation outfits and administrative bureaucrats will hate this, as they have long grown fat from the cumbersome and often antiquated legislation and regulations that small businesses are forced to deal with, often irrespective of their size, and the necessity to follow separate, complex, and expensive company formation rules and registrations in each country. I would not be too surprised to see attempts from these types of organisations to slow down and undermine this initiative, as it of course lessens their role, and reduces the number of intermediaries involved when a company expands and works in more than one country.

However, the European entrepreneurs of today and tomorrow will love this – and it is in the long-term interests of every member nation in Europe to support this type of initiative. This is how one creates the jobs of tomorrow. It is a sad fact that long-term enlightened thinking has not always been a strong point for politicians and entrenched vested interests in Europe, so it is up to enterepreneurs across Europe to applaud, support and spread the word about this initiative.