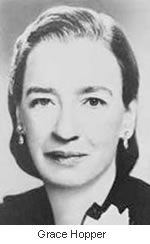 Ever wondered where the term ‘bug’ came from? Well, on September 9, 1945, U.S. Navy officer Grace Hopper found a moth between the relays on the Harvard Mark II computer she was working on. In those days computers filled (large) rooms and the warmth of the internal components attracted moths, flies and other flying creatures. Those creatures then shortened circuits and caused the computer to malfunction.

The term ‘bugs in a computer’ had been used before, but after Grace Hopper wrote in her diary “first actual case of bug being found” the term became really popular, and that’s why we are still using it today.

If you have a few minutes left, check her Wikipedia profile. Hopper was one of the first computer geeks in the world and went on to create the first compiler for a computer programming language and worked on the development of COBOL. She also coined the phrase “It’s easier to ask forgiveness than it is to get permission.”

Next time your computer or smartphone crashes and you suspect a bug, think back to this image:

UPDATE: Graham Cluley notes in the comments here that although Hopper was involved in the story she didn’t actually find the moth. From Wikipedia:

Hopper was not actually the one who found the insect, as she readily acknowledged. The date in the log book was September 9, 1947, although sometimes erroneously reported as 1945. The operators who did find it, including William “Bill” Burke, later of the Naval Weapons Laboratory, Dahlgren, Virginia, were familiar with the engineering term and, amused, kept the insect with the notation “First actual case of bug being found.” Hopper loved to recount the story. This log book, complete with attached moth, is part of the collection of the Smithsonian National Museum of American History, though it is not currently on display.
While it is certain that the Harvard Mark II operators did not coin the term “bug”, it has been suggested that the incident contributed to the widespread use and acceptance of the term within the computer software lexicon