Google is launching a new mobile app called Google Currents, the company just announced on its Mobile blog. Available in the US on iPhones, iPads and Android devices, the app makes it very convenient to read magazines and other content on a smartphone or a tablet.

As it was to be expected for such an app, you can flip pages with the swipe of a finger, bringing the magazine experience to your mobile device – even when you’re offline. Here’s the introduction video to give you a better idea of how it works:

You may have noted our own logo in the video, as The Next Web is one of the 150 media outlets and websites Google has partnered with for this app. While most of the big names are there, it’s worth noting that both the app and its full-length content are entirely free. 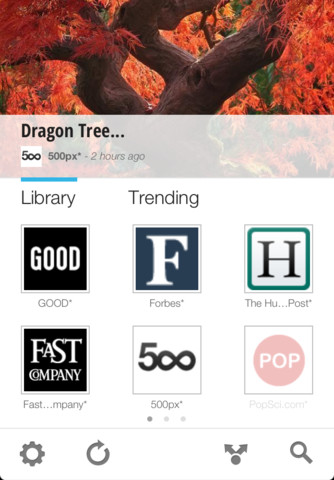 So what’s in it for publishers? Well, the app certainly represents an opportunity to get to know their mobile readers’ habits, thanks to full integration with Google Analytics.

Besides adding content from Google’s media partners, you’ll also be able to add content from other sources, such as RSS feeds, public Google+ streams and Google Reader subscriptions.

Google Currents also includes a curation element, as the app will let you follow personalized trends and read about breaking news in real time – a feature which could be quite similar to the Discover section that Twitter just announced, minus geo-awareness.

As a matter of fact, the competition is becoming increasingly stiff in this segment, with players such as Flipboard bringing the magazine experience combined with content curation to mobile devices.

While many will see Google Currents as as a Flipboard challenger, it’s actually much more of a blow to Onswipe, whose ambition is to help content producers make their sites tablet-friendly without needing to build their own app.

Like the TechStars startup, Google offers a self-serving platform, which means that any content producer will be able to make its content available on its app:


While Onswipe is backed by top investors such as Betaworks and Spark Capital, it will certainly be difficult for a small startup to compete with a giant like Google.

Update – Jason L. Baptiste, CEO of Onswipe, reached out to us with the following comment:

<sarcasm> Google is our nightmare like Buzz was to Twitter, Offers was to Groupon, and Video was to YouTube. </sarcasm> Currents is a neat addition to an already crowded space of news aggregator apps.  Onswipe’s focus is on increasing revenue and engagement for a publisher’s primary source of traffic – their existing web presence, not an additional app.  Onswipe is the best of both worlds – control your destiny and provide a beautiful app like experience in the browser.

➤  Google Currents, via the App Store and the Android Market

Have you tried Google Currents? Share your impressions in the comments.