There’s a big change at the top of UK-based audio sharing startup Audioboo today. Mark Rock, the founder and President of the company, is stepping down to pursue other projects, including one that sounds a little like a ‘Facebook for houses’.

Audioboo launched in March 2009 as a mobile app allowing users to share short snippets of audio online. It was quickly picked up by influential early adopters, particularly in the UK, where the likes of Stephen Fry and professional over-sharer Christian Payne (AKA Documentally) took to it with gusto.

Journalists in particular saw the appeal of sharing on-the-scene reports via Audioboo, and official partnerships were launched with media outlets like the BBC, the Wall Street Journal and The Guardian.

Rock handed over the CEO title to Rob Proctor in October last year and adopted the title of President. He now leaves Audioboo with 1.5 million registered users, 400,000 listens a day – both metrics he says have increased 300% in the past nine months fuelled by various commercial partnerships. That’s impressive growth to go alongside a recent push into the USA, although with the much bigger SoundCloud increasingly targeting media companies and brands, Audioboo is far from being the leader in the space. 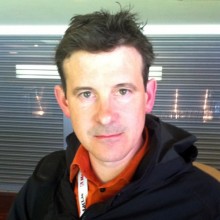 Following a short break, Rock says that he plans to work on a couple of other startup ideas. First up is an infographic startup Data Design, which he hopes will “move beyond the mere visualisation of complex data to a more automated approach.”

Then there’s another idea that Rock says he’s been mulling over since even before Audioboo’s launch. “It’s based on a property social network,” he explains. “Enabling us to create relationships with houses and their owners before we purchase them.”

“If you think about the property market, the biggest decision of your and you family’s life is handed over to people in estate agents who have utterly no interest in you as a person,” Rock says. “It’s a pure cash nexus…. why not expose the deep, rich and meaningful life of a property to people that may want to purchase it?

“Think of it as genealogy for homes,” he continues. “Being able to wander past a house you love, register it on your phone, receive updates about its ‘life’ And, crucially, build a relationship that allows you to be the first to know if there is a sale being considered.”

It’s not perhaps the big leap from Audioboo, a startup he says he is “absurdly proud of”, as you may think. “Both are about the importance of individual relationships in narrative, history, connection,” he says. “I know nothing about property. But, there again, I knew nothing about audio when that baby launched. Ignorance is not only just bliss sometimes but a path to opportunity offers may not see. Or maybe I’m just lying to myself…”