The FBI is looking for a development team to build an app that scrapes and maps out social media data. The resulting data will be used for surveillance, monitoring terrorism and cyber crime, as well as utilizing social media as a first response tool during emergencies.

But among the many privacy issues that are inherent to monitoring every word that is broadcasted by a generation of over-sharers, the report also reveals how incapable traditional systems are in reporting and responding to emergencies — both natural and that of national security.

Right now, the FBI is only searching for proposals from third parties and has described what it’s looking for in an official, yet sloppily scanned document on the Federal Biz Opps website. On closer look at Section II-B, you’ll see exactly how much the FBI is planning to rely on the likes of Twitter and Facebook for future intel — making the dreaded “Fail Whale” that much more serious. 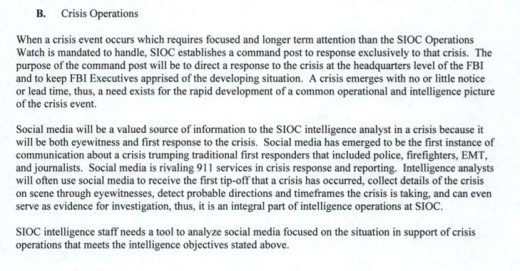 The FBI states, word for word, that “Social media is rivaling 911 services in crisis response and reporting.” It continues to state that:

In the case of many emergencies (especially natural disasters) Twitter really has become the best way to gleam information through first response reporting. But since none of the information is official, and all of it is public, it will be interesting to see what happens when third-party organizations have access to much of the information that the FBI relies on.

Better yet, what happens when Stephen Colbert says “everyone tweet about an earthquake right now to stress FEMA out” –like when he called upon his audience to cause chaos on Wikipedia? The world, my friends, is a mad one.

Should the FBI rely on social media? Is it a violation of our privacy if our tweets are already public?