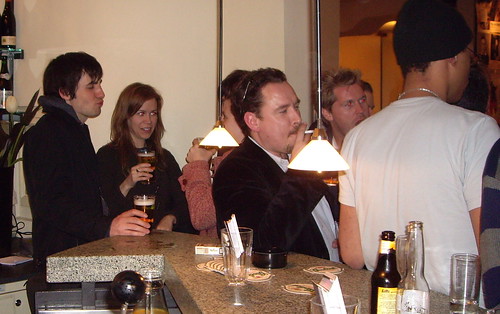 Day One has finished and we have seen lots of great stuff and speakers. From the immortal web to the semantic web in 8 hours. That’s only possible at The Next Web! And of course, not to forget, a live Diggnation show in Amsterdam. With people flying in from all over Europe: Denmark, Germany, Sweden and France. Only to see Kevin Rose and Alex Albrecht present Diggnation.

But it was probably worth the drive or the flight. What fun we had! Talking on stage about Red Heads and Table f*cking.. :-) The crowd went wild and they even started an mustache rage seen latest in the early 60’s… Later on the party moved to the inner centre of Amsterdam where you had to possibility to chat with the guys and drink beer with them. The people from Rummble threw a nice party with (again) free beer. Yes, free beer is definitively a hot topic amongst the Diggnation guys. But, ok, who’s not in for a free drink?