The BBC has given the biggest indication yet of what its digital offering will look like for the London Olympics, and The Next Web was on hand yesterday to get a glimpse of the action.

Back in January last year, the BBC announced it was reshaping BBC Online. The underlying premise was to concentrate on fewer things, but do those things better.

With that in mind, the London Olympics has become an unofficial milestone for the BBC to get its digital affairs in order, and leave a legacy for all future BBC service-users to tap into.

2011 and 2012 saw a slew of digital developments emanate from the BBC. For example, dedicated iPlayer apps for ioS and Android were rolled out, and we reported on the new TV-friendly version of iPlayer too. The BBC’s vision is to take iPlayer beyond the tech-savvy, beyond catch-up, beyond the PC and embed it firmly in the mainstream.

But what about the Olympics? This year so far, we’ve already seen the BBC’s 3D plans for the Olympics, with its modest toe-in-the-water restricting this initiative to three events and a series of highlights packages. Sports and News apps were launched for Virgin Media’s TiVo service too. But with one of the world’s biggest sporting events kicking off in London in almost two months, the BBC has announced what it really has in store for the UK public. And it is pretty impressive.

Cast your mind back to the Beijing Olympics in 2008. It actually doesn’t seem all that long ago, but in technology terms it was eons ago. There were no real consumer market for apps as we know it today, tablets hadn’t yet taken off and the concept of watching live TV on our mobile phones was a novel one to say the least.

Fast forward to 2012, and it’s a completely different landscape. Connectivity is the name of the game, and in what the BBC is calling the “first truly digital Games”, it’s setting out to ensure nobody misses a thing. Here’s an overview of what you need to know about the BBC’s coverage.

The BBC’s main televisual coverage will be beamed across BBC 1 and BBC 3, with catch-up and hand-picked alternative events available on the BBC Red Button and, as usual, through iPlayer. For radio fans, BBC Radio 5 Live will be on call too, but the BBC is also launching a special radio station just for the Olympics – BBC Radio 5 Live Olympics Extra, which will be available online and through Freeview.

In terms of online and “in apps”, here’s what you really want to know. Audiences will be given full control over when and where they watch Olympic events – PC, mobile, tablet and connected TVs, the latter encompassing smart TVs, games consoles (PS3) and the BBC Red Button.

If you’re a Sky, Virgin or Freesat user, the BBC’s Red Button will let you access the full 24 live streams, whilst Freeview and BT Vision customers will be able to access a 24-hour channel with additional Olympics content via the Red Button. They will get a second channel showing alternative content between 7pm and 5.30am.

So, this will double the choice on offer from the main TV broadcasts – meaning that in the evenings, audiences will have at least four television services plus the full 24-stream service via its website.

During a live demo in London, we witnessed one particularly cool feature of the BBC’s online interactive video player. It will let users leave live coverage of events to catch another key moment of another event, then jump straight back into the live action. And there will also be chapter markers to let users navigate to key moments within an event.

Here’s former footballer and BBC presenter Gary Linekar with a quick demo of the soon-to-launch service:

Through the player, you’ll be able to access sports guides during live streams, offering five key facts about events you may know little about. So if your knowledge on the rules of Tae Kwon Do are bit sketchy, this should help you out. And there will also be ‘alerts’ highlighting other key events happening elsewhere, so you can switch over to watch something that’s more appealing to you.

Moreover, every athlete will have their own page on the BBC site, as will every sport, venue and participating country. Audiences will be able to follow and favorite accordingly, and access Twitter visualisations and social media commentary. 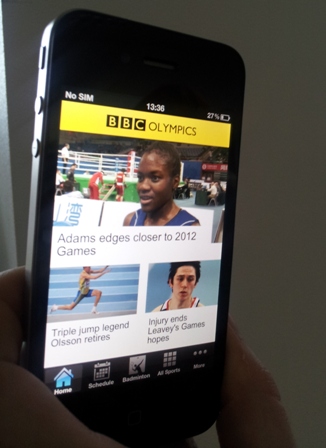 Given that we’re in the decade of mobile, the BBC has produced native BBC Olympics Sports apps for iOS and Android devices, which will launch just before the Olympics kick-off at the end of July.

Users will be able to access the same 24 live streams and video highlights available on all other platforms. Crucially, unlike the iPlayer app, the Olympics app will stream across 3G on all UK mobile networks, and it will have offline access too for users to read stories when they don’t have access to their network or WiFi.

We’re told that this app will eventually morph into a dedicated BBC Sports app, similar to its existing News app.

The BBC has also developed a mobile-optimized site for those using other handsets, which will essentially mirror the standard Web version.

So, we’ll start hearing more about these digital services as we approach the start of the Olympics on July 27. And we’ll be sure to bring you more news on these when they’re rolled out to the public.

Meanwhile, we managed to grab a few demo videos yesterday, which helps to showcase what you can expect these services to look like. Here’s a quick snapshot: