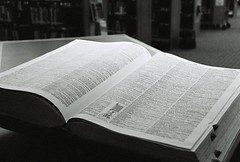 This is the time of year when the Oxford English Dictionary unveils the latest words to have become popular enough to warrant official entry into the English vocabulary.

Amongst the new entries are ‘Unfriend‘ meaning the removal of a contact as a ‘friend’ on sites including Facebook. In the USA ‘Unfriend’ has even been voted as ‘word of the year’ by the New Oxford English Dictionary, reports The Telegraph.

Elsewhere, ‘Tweetup‘, meaning social gatherings arranged via messages posted on Twitter, makes the list, as does ‘Hashtag‘ which brings together common words with the ‘#’ symbol to enable Twitter users to search for conversations including similar key words.

‘Freemium‘ which describes the business model where free services are offered to entice customers to purchase premium products, as described by WiReD’s Chris Anderson in his 2009 best-seller ‘Free’, is also added to the dictionary.

Another featured word and one which has dominated much tech and media discussion throughout 2009 is ‘Paywall‘, describing how sections of websites are made available only to paying subscribers.

The Web 2.0 favourite ‘Tag cloud‘ is added, as is the ‘Slashdot effect‘ which is added as a noun to describe the effect of the crashing or dramatically slowing down of a website due to huge increases in traffic generated by links from other sites.