Grab your agenda and check the balance of your bank account because it’s about time again to look at which hot tech events you should be purchasing tickets for this year.

Here at the TNW offices, we are insanely excited that in less than 46 days we’ll be kicking off with TNW2012 in Amsterdam. Check out our 20+ confirmed keynote speakers for a glimpse of the awesomeness we have in store. Don’t forget that if you haven’t yet bought tickets you can still get one of the last early bird tickets now and pay by invoice later.

Once again we’ve updated our list with lots of upcoming tech and media events and for most events we’ve arranged a special discount. Our goal is to create a compact but complete overview of events and so we thank everyone who has contributed to it thus far.

Digital creatives looking for a leg up should have a go on Mag+. Submit your dream iPad publication in their contest – the prizes at stake include iPads and cash sums ranging from £600 to £3,000, as well as exposure to industry luminaries and the chance of being featured in an international Mag+ campaign. You’d be joining the Mag+ community of iPad titles including British Journal of Photography, The Next Web, Victoria & Albert Museum, American Photo, Sound + Vision and Alternative Press.

All the details about how to submit are here!

Make sure to say hi from TNW when visiting these crazy Dutch guys!

The 19th annual SXSW Interactive festival will take place March 9-13, 2012 in Austin, Texas. An incubator of cutting-edge technologies, the event features five days of compelling presentations from the brightest minds in emerging technology, scores of exciting networking events hosted by industry leaders and an unbeatable line up of special programs showcasing the best new websites,video games and startup ideas the community has to offer. You will be able to meet our TNW Editors here!

Cloud Computing Imperative 2012.
Cloud computing undeniably introduces management challenges to an organization. Rather than problems however, management should see them as opportunities. As such, it is better for organizations to identify and deal with the issues early, so that they can gain maximum benefit from the changing technology panorama. Therefore, management dealing with this paradigm shift in gaining better skills and understanding is a necessity to create a smoother and positive transition.

The Corporate Social Commerce Summit is the leading conference for utilizing social media to acquire new customers, cultivate brand loyalty, and boost sales. The conference features 20+ corporate speakers from companies like eBay, Neiman Marcus, Staples, Cars.com, Kodak and many more. If you’re looking to leverage social media to facilitate purchases, and drive conversations then this is a must-attend event.

TNW readers receive a $150 discount to the summit using the discount code: BOSTON2012

For the second time around the Entrepreneurs Club Berlin e.V. is organizing the Startup Camp Berlin in partnership with media.net berlinbrandenburg. The event will take place on March 16–17, 2012 at the Mediadesign Hochschule, in Berlin, Kreuzberg. Their bitcrowd CampChamp awards give the chance to get a prototype developed along with other cool add-ons (worth €40.000). Amen, Gidsy, Upcload, Research Gate, EyeEm, DriveNow along with well known VCs such as Neuhaus Partners, Linden Ventures, K-New Media, Doughty Hanson Technology Ventures will all be present. Will you?

TNW Readers can get a 20% discount using this code: Medienpartner-ZNUKLNBL

IGNITION West intensively explores the intersection of technology and content. Companies like Facebook, Zynga, Pandora, Google and Twitter are both technology and content companies: powered by computing, they empower users to enjoy, curate and create content. IGNITION West dives deep into this convergence. Through high-level discussions and demos from startups, IGNITION West will bring together who is defining innovation to discuss what’s happening now, what’s coming next, and how it will affect you.

TNW readers can benefit from a 30% discount on standard or early bird tickets by using discount code ‘TNW’ here.

ElggCamp San Francisco (March 24, 2012 in San Francisco, CA) is a one-day event that bring together leaders in innovative technologies and experts in social media to discuss how Elgg.org fits into current social media trends, and how it has an important part as an open source project in helping to shape future technology. Stick around after the event for free food and drinks and to network with the developers, start ups, entrepreneurs, and other socially minded people.

TNW readers can get a 33% discount with the code ‘TNW’.

The second MUSIC techpitch 4.5 event, an evening pitch event showcasing the latest music-tech startups, in partnership with EMI Music will be held in London on 27 March 2012. Eight music-tech startups will present their business ideas and revenue models during a three minute pitch followed by a Q&A by a panel of judges.

TNW readers can get a 20% discount on available tickets with discount code TNW20.

Now in its 4th year, the SMWF Europe 2012 will be providing a format for networking, engagement, and lots of social media debate around the latest tools, technologies, platforms, and emerging trends within social media marketing. With over 4000 attendees last year, the show has grown significantly to become one of the leading shows in its field, hosting a variety of free to attend workshops & conferences for marketers, PR professionals, brands, agencies and SME’s.

TNW readers can save 15% on tickets with the code TNW15 here. 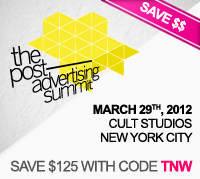 The world has entered a new age of marketing. The Post-Advertising Summit will bring together the best and brightest in the marketing field to demonstrate how they engage their audiences and shape the future of marketing. Keynotes, panels and interactive workshops will reveal the power of brand storytelling and provide actionable take-aways, including real pieces of content, for the attendees. The Summit will revolutionize the way you think about content and is like no other marketing event in the world.

TNW Readers can save $125 by using code TNW. The Early-Bird pricing ends 3/1.

MIPCube is the future-of-TV event taking place before MIPTV, the world’s largest entertainment content market. Speakers include Twitter’s Tony Wang, on “Must-Tweet TV”; YouTube, Machinima and Maker Studios on next-gen broadcasting; and Microsoft, on Kinect’s TV implications. The most innovative TV startups and cross-platform creatives will also be honoured at the MIPCube Lab and Content 360 competitions; and tomorrow’s hottest TV app could well be created at TV Hack Day… on a boat!

TNW readers can get 35% off MIPCube registration (both full and startup rates) with the code THENEXTWEB here!

Now in its 8th year, the O’Reilly Where Conference is where the grassroots & leading-edge developers building location-aware technology intersect with the businesses and entrepreneurs seeking location apps, platforms, and hardware to gain a competitive edge. Immerse yourself in 3 days of hands-on training, information-rich sessions, and an Expo Hall with key players & products. Topics include: Mobile Development, Location Development, Business & Strategy, Marketing, and a Location Marketing BootCamp.

Join hundreds of experts and practitioners in the mobile and location ecosystems. Receive 15% off registration with discount code: WHR12NXT

DIBI stands for Design It, Build It and is a twin track web design and development conference in North East England. The conference is aimed at web practitioners who want to learn new skills and be inspired by people at the forefront of the industry. This year we will welcome Cameron Moll, Seb Lee-Delisle and 10 other fantastic names to the stage on April 17th, and on April 16th delegates get to choose from a series of hands on workshops. Follow us @dibiconf.

We’re taking The Next Web Conference to the next level. Expect to be blown away, expect things you’ve never seen at an event before, things you’ve never heard, expect the best content, an amazing show, great people, industry leaders from all over the world and networking opportunities at decision-making level.

We will outshine ourselves. TNW2012 is the best tech conference you’ll attend in 2012. Our goal is to inspire you, to give you an unforgettable experience and to make sure you get an ROI of at least ten times your investment.

MobileDevCamp NYC 2012 (formally associated as iOSPadDevCampNYC, iPadDevCampNYC and iPhoneDevCampNYC) is an annual not-for-profit developers gathering to develop applications for mobile technology platform. This year the focus is on the arrival of cloud technology (exemplified by Apple’s iCloud product) and what it means as an integral component of mobile applications. Cloud integration will also be a component of the hackathon competition, which has a new twist this year – developers will compete for prizes in “Iron Chef-Style” challenges that will be announced at the event not before. Come join us!

AnDevCon III is the technical conference for software developers building or selling Android apps. It will offer one day of intensive workshops, followed by three days of technical classes. More than 1,500 software developers, engineers and entrepreneurs from 40 nations are projected to attend AnDevCon III and choose from 70+ classes. Exhibits admission is free: visit more than 50 exhibitors!

TNW visitors and subscribers can receive a $100 discount off either the 4-day or 3-day pass by inserting the code MEDIASPONSOR here!

The TERENA Networking Conference (TNC) is the largest and most prestigious European research networking conference – over 500 participants, including decision makers, networking specialists and managers from all major European networking and research organisations, universities, worldwide sister institutions and industry representatives attend.

Through keynote speeches by renowned specialists and many parallel sessions, TNC presents an overview of the latest developments in research networking, both in the technical field and in the areas of application and management.

Maastricht Week of Entrepreneurship, 23-27 May, Maastricht

The Maastricht Week of Entrepreneurship is Maastricht’s largest entrepreneurship event. Happening yearly, the ME Week brings together over 200 students and entrepreneurs for an exciting week of workshops, presentations and lectures. Participants get inspired, network and exchange ideas, share practices, and ask for advice. This year’s theme is “Change Makers”. We will challenge participants to spot opportunities from the perspective of a person ready to change the world and inspire them to have the courage to start.

TNW readers can get a 15% discount by using this code “meweek-tnw”. 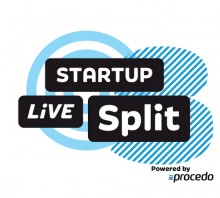 Startup Live Split is a conference oriented towards startups. There will be 300 participants, speakers from all over Europe (CEOs, VC’s and media icons), and a startup challenge for the best 16 startups with 10 judges/mentors, one of which is Patrick de Laive from TNW! This is the first conference of this kind in Croatia, and it is being head in Split which is known for its sunny beaches in the summer.

UbiQ Paris is the first international Digital Entertainment Showcase (conference and exhibition) that spotlights the best of digital entertainment content creation, business cases and winning strategies for TV, music, games, apps and branded content. It will be held in the heart of Paris, at the prestigious Palais Brongniart, on June 18-19th 2012.
Randi Zuckerberg, former Marketing Director of Facebook, is a confirmed keynote speaker. Ubisoft, FremantleMedia, BitTorrent, Ogilvy, Zodiak Active, Horyzon Media amongst many others have confirmed their presence at UbiQ Paris.

The first 50 readers to take advantage of the TNW12 discount code receive €100 off early-bird registration (valid until February 29, 2012).

ICT Spring is all about innovation: cloud computing, digital distribution, mobility, social networks and media, disruptive technologies, with a special highlight on trust in security. Join us for ICT innovation and inspired bold logics!

TNW Readers get a 100% discount on tickets for the trade show using code: TNW212.

You may not have heard of us, or more accurately, you may have but just not know it. The original event was known as MyGreatFest and as a great man once said, “You never really know where you are going until you know where you have been”. We have yet to witness first hand the awesome goings on at JailbreakCon. However, the plan is to feature the best hackers, developers and themers that the community has to offer. All in one place to educate, inform and share their wisdom and experience.

Are you hosting an event yourself? Think it would be relevant to our readers? Please contact Wytze to discuss media partnerships with TNW or submit your event here.