This article was published on September 29, 2014

Tango messenger has already branched out into a variety of content and games via its platform. However, the new photo slideshow app, now seeing the light of day some two months after a brief appearance on Apple’s App Store, is back, at least on Android for a short time, and available worldwide with a somewhat altered configuration.

Tango Music Pix is available for Android now and is expected to launch for iOS sometime this week. Unlike that original version, its musical partner is now Rumblefish, with its catalog of 3 million songs. While Spotify is still a partnership for the Tango messaging app, the company considers Music Pix an opportunity to bring in a new partner offering high-quality content for users. Music Pix will be updated over time and Spotify integration is also possible for the future, according to the company.

Check it out
Craft and share a 30-second slideshow swiftly (from a beta version of Music Pix with iOS 8).

As the first sister app for Tango, Music Pix targets new users with specific interests in photography and music, while at the same time fully integrates with Tango’s messaging app.

“This is a new experience for users to tell their stories, comprising up to 10 photos that they want to share as a slideshow,” said Chi-Chao Chang, Tango’s vice president of strategy. “Then they pick a song or track that they want associated with that slideshow and boom they can share back to their friends and family in Tango. The emphasis is on speed and flow.”

That’s about as simple as a process gets: Launch the app, scroll through the images in your Pictures or Gallery folder, choose 10, pick out a song, give the slideshow a title, and share.

Emphasizing its independent status, Music Pix users can share their slideshows through the Tango messaging app via the Tango News Feed or Tango chat, Facebook, Twitter and email.

That said, there’s no shortage of noisy photo apps out there, but Tango Music Pix specifically generates only slideshows based on 10 shots and does not work with video. “We want the process of creating the story to be very fast and user friendly,” Chang said. While right now the photos are derived from the users’ own photos, Chang hopes the app will be able to pull in photos from other sources down the road. 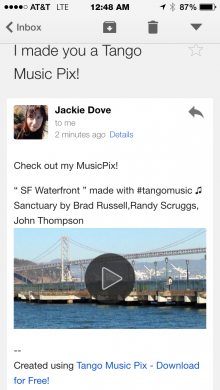 While Music Pix was available for a short time on the App Store in July, the company did not consider that an official launch. Further, the Tango team spotted a critical bug in the app, so they removed it from the App Store and subsequently took their time making sure everything was ready for the official launch today, according to a company spokesman.

Music Pix is the first product to emerge from Tango Labs, a new group created by the company to encourage developers to experiment with ideas for new Tango apps. The apps from Tango Labs use the Tango SDK for interacting with the app’s platform.

Projects can span a wide range, but must complement the Tango core messaging platform in interesting and engaging ways, said Chang. Lab output is confined to standalone apps.