We hear about new location-sharing apps just about every week, but even with all these entrants, no one company has truly helped users easily link up with their friends while they’re out. On one side of the spectrum you have Foursquare for general location broadcasts and on the other side you have apps like Apple’s Find My Friends and SocialRadar for ubiquitous updates. 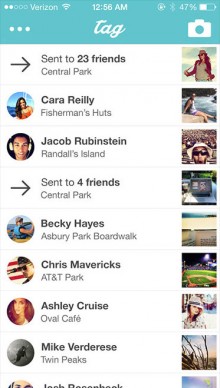 Tag, a new app for iOS, wants to find the sweet spot in the middle where you can actively share your location with your friends without it feeling either too public or too invasive. An Android version is coming soon.

To use the app, you simply login with Facebook and “tag” your friends with a combination of your location, text, photos and video. The idea is that if you’re sitting in a bar and want to invite some friends to join you, you can choose a pre-selected list or tap on individual names to send them a message where you are.

While the interface is extremely minimalist, it’s actually too simple for first time users. When I signed into the app, I was presented with a screen to share my location and a photo. However, there weren’t any instructions on who would see it and where the photo would end up. Given how sensitive location data is, Tag and other location-sharing apps need to do a better job at educating users about how their information is going to be used.

The next update from Tag should fix some of those complaints though, as the startup will soon add an intro video, pop-ups to explain the tagging process on the first time and Facebook invites to make it easier to connect with friends.

Co-founder Aneel Ranadive said in an interview that the app’s goal is to do away with the chain of “Hey, where are you?” and “What are you doing?” text messages that friends send when they’re looking to hang out.

Tag was previously known as Marco Polo, so it looks like Ranadive and the team are going with a theme of childhood games. The startup originally started out as a daily deals site called Pinchit before pivoting to a social scrapbook and now its latest incarnation as a location-sharing app. Ranadive also previously created the [email protected] anonymous social network in 2006.

In addition to helping friends meet up, Tag also expects that brands will use the service to interact with fans around specific events and locations. The opportunity is similar to how Snapchat is positioning itself, though without the ephemeral angle.

“We think [Tag] is an amazing platform for anyone with a fan base to send content privately just to their fans and let fans reply back just to the person they’re following,” Ranadive said.

As with all social apps, Tag faces the problem of building the critical mass required to make the service sticky and valuable for users. Ranadive said the team is focusing on bringing on specific groups of users – Kings fans, for example – in order to fill out Tag’s user base. The startup is also targeting events, event promoters and schools in an effort to reach different communities.

When I asked Ranadive what Tag’s unique selling point is among the crowd of location-based apps, he responded:

There’s no other way to, with a few clicks, see what your friends are up to…Tag lowers the barrier to letting you ping your friends. We’ve seen really strong early engagement from first adopters that have gotten on it. It’s our mission now that this can hold consistent by going to market.

I want to like Tag. It has a clear solution in mind without doing too much or complicating the interface. I’ll just have to wait until more of my friends sign on for it to actually work.