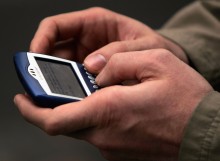 Looks like the bad news keeps rolling on in for BlackBerry. T-Mobile announced that it would stop carrying the Canadian company’s smartphones in its US stores. If you want them, you’ll have to get it directly from the manufacturer, or you could try any of the other carriers.

Not surprisingly, T-Mobile’s decision has to do with “drastically weakening smartphone sales”. And with BlackBerry shifting away from the consumer market and into the enterprise, it’s fitting that they leave the retail store. Maybe this will open up more shelf space for Windows Phones.

Earlier this week, BlackBerry signed a letter of intent with a group of investors led by Fairfax Financial for a potential acquisition. This comes after the company revealed it would cut 4,500 jobs worldwide after a poor Q2 2014 fiscal year performance.

➤ T-Mobile US will no longer stock BlackBerry in stores