A glance at this year’s SXSW schedule and “Slashathon” might sound like an all-night 80s horror flick screening. In reality, the title is fairly literal: rock guitarist Slash is hosting an artist-focused hackathon on Wednesday with the hopes of drawing in crowds at the perfect mid-point between SXSW’s Interactive and Music sessions.

“It was an idea that came up when we were brainstorming the launch of our new record,” Slash, also uncommonly known as Saul Hudson, tells The Next Web in a phone interview. “I’m sure there are a lot of people out there who don’t have a platform to talk about new tech ideas for music, so we hope that the event helps inspire software developers to create something unique in the spur of the moment.” 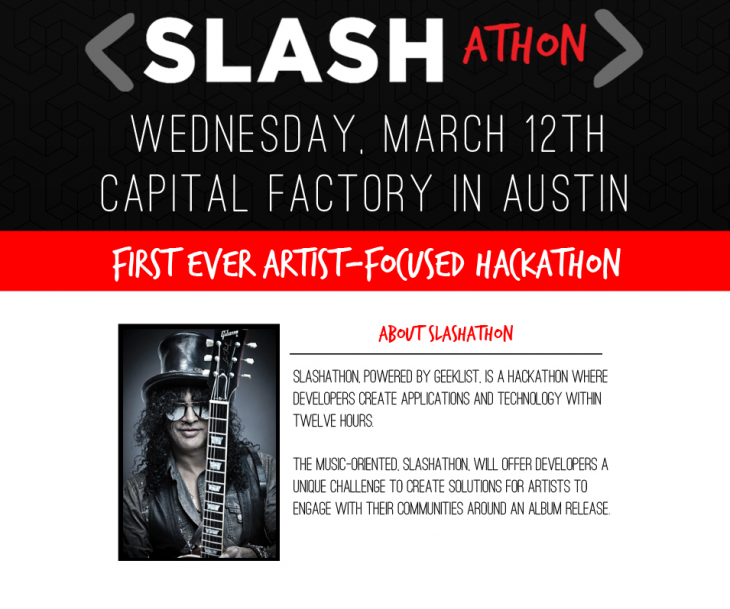 Despite having been involved in several apps and video games, Slash says he’s not a particularly techie person, and is mostly interested in music recording apps that aid artists on the go. “I travel a lot, so tuner apps or things that enhance sound recordings are what I’m most interested in.”

A fan of Spotify and Pandora, the guitarist says music streaming apps are great for artists to both discover new music and share with fans, and he hopes to see more apps devoted to helping artists gain exposure.

“This is what people do now: they go to their computers and smartphones and find new music, shows, and artists,” Slash says. “Spotify and Pandora have definitely helped soften the blow on musical piracy… making records is a huge business now, and these apps help artists feel like they’re not doing it for nothing.”

While he doesn’t intend for the Slashathon to necessarily “solve” problems — as most startups tend to focus on — he would like to see music discovery become more catered to recording artists, not just consumers.

“I’d like to see the trend continue on apps that help artists get the word out about their new records and local shows,” he says.

It’s not surprising that a musician like Slash is keen on discovering new music. Thanks to Guitar Hero’s repopularization of “Sweet Child O’ Mine,” it’s hard to escape a dive bar or commercial without the familiar rock rhythms, even for Slash himself. Just as our interview began, he said the song was playing from a TV in the room. “Funny you mention it!” he says.

But of course, he’s grateful for the multi-generational love that’s passed along, decades after the song emerged.

“I was definitely more sick of it when we first wrote, recorded, and played it,” Slash says. “But over the years… it’s one of those things where you have to appreciate that a lot of people still like it.”

The SXSW Slashathon takes place at Capital Factory, and begins at 9 AM on March 12. Those who can’t make it in person can also Livestream the event.