The Next Web was out and about at Finovate Europe this week, a 2-day London conference showcasing the future of financial and banking technology.

One of the companies we met up with was SumUp, a Berlin-based firm that we last caught up with back in November, when it launched an API for developers to add payment functionality to their apps.

In a nutshell, SumUp brings Square-like technology to merchants in Europe, letting them easily accept debit and credit payments via their smartphone or tablet. This is all enabled via a little card reader that attaches to, say, a coffee shop-owner’s iPad.

Indeed, we’ve previously written that Europe is becoming something of a hotbed for Square-style services, with the likes of iZettle (more here) and Rocket Internet’s Payleven (see previous coverage) all vying for a slice of the pie.

So how is SumUp setting its up its stall for the long haul? Well, with SumUp Pay for starters.

While the young startup did try to distance itself from Square-comparisons for various reasons, SumUp Pay essentially brings Square Wallet-functionality to its existing offering, letting consumers download an app, link their credit card and pre-approve a particular establishment (coffee house, clothes shop etc) that’s already signed up to the existing merchant-focused service. This means a user doesn’t even have to take their phone or wallet out their pockets to place an order.

Thanks to the wonders of geo-fencing, the second a consumer walks in to order a latte, the server will see a photo of the customer pop up in front of them, with their name and notes of what they usually like to order too. It’s all done hands-free, with nothing more than name-confirmation and chit-chat required to seal the deal.

As soon as payment has been made, a receipt is sent automatically to the customer’s phone. It also goes without saying that this will only be applicable to smaller-valued items such as coffee and cakes – you’ll not be able to buy a leather sofa using this. 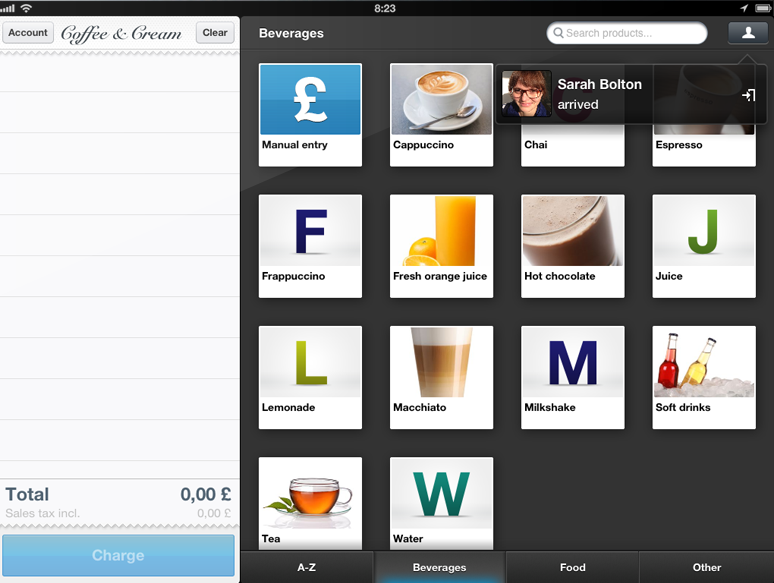 At Finovate Europe this week, SumUp gave TNW a sneak peek of SumUp Pay, and while it was only a demo, it was clear to see what they’re striving for with this. And the key buzzword here is frictionless.

It’s still in closed alpha for now, but when it launches later this year, it should go some way towards streamlining the checkout process. While specific alpha clients weren’t discussed, if this was rolled out in a large coffee shop chain, it would significantly speed up the ordering process – no fumbling around for cards. And even if NFC does finally emerge to realize some of its potential, there’s still the iPhone obstacle to consider. For SumUp Pay to work from the consumer’s perspective, all that’s needed is a smartphone and an app.

The benefit here runs two-fold. SumUp already has “tens of thousands” of merchants signed up to its existing card-reader model, and that’s half the battle in terms of getting SumUp Pay off the ground – it’s integrated directly into the existing set-up. And for the consumer, well, it gives them another option to pay.

There’s a lot of interesting stuff going on in the financial technology space at the moment, and it will be interesting to see how things pan out over the next twelve months and beyond. And we’ll be sure to revisit SumUp Pay as it nears a full public launch.

Meanwhile, you can see all our coverage from Finovate Europe here.