Now that the new iPad has hit the shelves of stores around the world, equipped as it is with a Retina display, it’s going to have a frustrating effect on otherwise happy owners of the original iPad or the iPad 2 – and that’s not just blind envy of those who bought the shiny new version.

As we’ve previously reported, the 2048×1536 pixel resolution on the new iPad’s Retina display means that developers will have to submit updates to their apps that feature ‘@2x’ graphics. With a quadrupled pixel count, they’ll look great on the 2012 iPad, but all those extra pixels mean greater storage requirements on your iPad. The result? You’ll be able to fit fewer apps on your iPad.

Now, if you have a new iPad, at least that reduced app number is counteracted by the fact that the ones you do have will look beautiful in their higher resolution. If you’ve got an original iPad or iPad 2, you’ll be using a load of extra storage space for high-resolution graphic you’ll never get the benefit of. 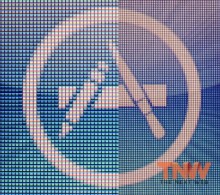 Developers need to update their apps to support the new iPad – their apps just won’t be competitive without that boost in resolution when rival apps look so much better on a 2012 iPad.

Apple has already approved a bunch app updates with improved resolution – indeed, the update list on my iPad 2 just now inspired this post; app after app with ‘Support for Retina display’ as the main improvement. Well, that’s just dandy for new iPad owners, but for the rest of us, our iPads suddenly have a lot less potential storage.

Last week, our own Matthew Panzarino reported that apps could almost double in download size thanks to the Retina graphics – that’s why the 3G download limit was increased to 50MB. I struggle with storage space on my 16GB iPad 2 as it is, trying to balance apps with TV shows and other content. Is it fair that I have to fill some of that space up with graphics I’ll never get the benefit of? Shouldn’t Apple intelligently serve a version of an app that’s optimized for my device (and yes, I’ll admit that’s easier said than done)?

I didn’t really want to upgrade just for a better display, but as the Retina updates to my favorite apps continue to roll in, suddenly a 32GB or 64GB new iPad feels that little bit more appealing.

UPDATE: Of course, as @simon_harper notes, iPhone users with universal apps (those designed for all iOS devices) will be equally blighted by hi-res iPad Retina graphics they don’t need.