Research suggests iPhone users, if given the opportunity, are more likely to buy the more expensive model Apple shows us tomorrow, and they’ll likely do so within a year of its release.

The data comes from Mixpanel, an analytics company monitoring trends in smartphone adoption. It’s just released several graphs of data on the current usage of iPhone models, going all the way back to the 4. If nothing else, it’s a good history lesson to brush up on before the event tomorrow. But if you look at the data, you might be able to get some idea of just which phones announced tomorrow Apple’s users will be champing at the bit for.

If all the leaked data and rumors are correct, we’ll be seeing an expensive new iPhone called the Xs (ugh, what a name), something called the XS Max (ugh, that’s even worse), as well as a budget version called either the Xc or Xr. While we don’t yet know the price of any of the models for sure, Mixpanel’s data suggests users will likely show more of an immediate interest in the expensive model, no matter what the actual price point is.

According to the data, it took the 2017 iPhones (8, 8 Plus, and X) 7 months to get to 20 percent of the market share, and a year to reach about 30 percent. Of the three phones, the iPhone X has been the most popular, with 12 percent of the market at its peak. It’s been climbing steadily ever since its introduction. 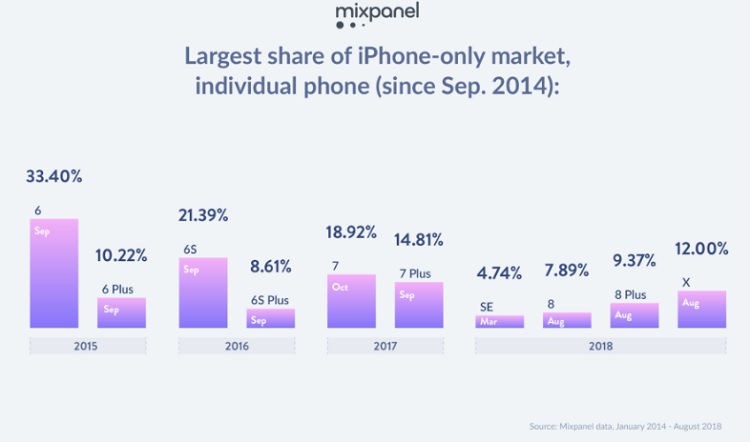 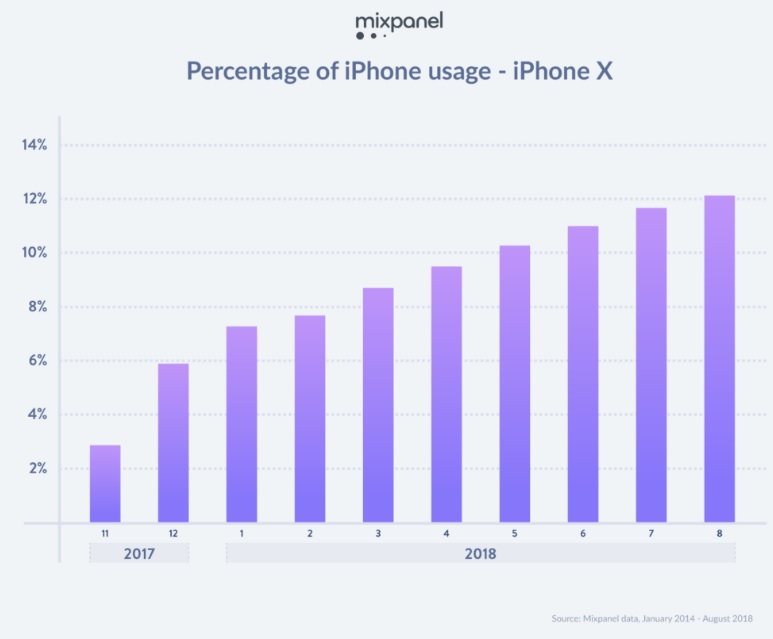 This data suggests that, far from being turned off by the high price tag, a surprising number of iOS early adopters are willing to tank the price if it means having the latest model, and those who aren’t are using it to justify getting the second-best. In fact, the 8 Plus is also narrowly edging out the 8 in peak sales. No other Plus model has done that, not even within the wildly popular iPhone 6 family. Mixpanel suggests this success means the 8 Plus is being anchored by the X — consumers can more easily justify the price of an 8 Plus because hey, at least it’s not the $1k X.

And I can attest to that working, at least anecdotally, because that’s exactly what I did when I bought my iPhone 8 Plus. It was either a new phone, or a new phone and a non-broken desk chair. I was willing to trade the Animoji for the latter.

By contrast, the relatively low-priced iPhone SE has only ever had about 5 percent of the market on its best day.  A report from Bloomberg last month suggests these phones push users towards the better models, simply because they shine so much brighter next to the likes of the SE and SE 2.

The iPhone X was also a radically different design from previous generations of iPhones, doing away with chunky bezels and going all-in on the cameras. By contrast, the 8 and 8 Plus looked very pedestrian. The new generation won’t have that — the leaked images suggest all of the potential new models will look very much like the X’s notched beauty.

That doesn’t necessarily spell doom for the Xc/r, but it does suggest the userbase at large simply isn’t looking for a budget phone, at least at first. The iPhone 8’s rising percentage means it’s slowly being adopted by more users — in fact, it’s rising at an even fast rate than the X. The 8 Plus was also the top-selling iPhone of the last financial quarter.

Also, since the largest percentage of the users are still hovering somewhere within the iPhone 6S/7 era (13 percent of users still have the former, 17 percent the latter), it seems likely we’re reaching the point where those holding onto older models might finally be ready to make the switch.

Another takeaway from Mixpanel’s data is that iOS users are more willing than Android users to adopt the latest version of the iOS. As of last month, just over 93 percent of users have iOS 11 or newer. Though, as an iOS user myself, I can attest that at least part of that is due to the fact that your phone or tablet will not stop bugging you about it until you authorize the update. I guess wearing down the user is as valid a form of persuasion as any.