Stanza for iPhone has gotten one last update to fix issues with iOS 5, reports Macworld. The app, originally developed by Lexcycle and subsequently purchased by Amazon, has been left to rot for many moons, leaving users wondering if it would ever be updated.

The app was a favorite of mine for many reasons, including awesome features that have yet to be duplicated in popular reader apps like Amazon’s own Kindle app. The adjustable margins, for one, are an incredible feature, especially for heavy readers that like to pack as many words on the page as we can. The ability to simply slide your thumb up and down on a passage of text to adjust brightness was genius.

There is also the support for custom online libraries where users can…ahem…share libraries of their own books, although I don’t think that function was ever officially sanctioned. Stanza is also one of the few readers to be nearly completely agnostic about formats and stores, accepting just about every major format of book and access to a ton of genre-focused independent stores, rather than just Amazon or Barnes & Noble. 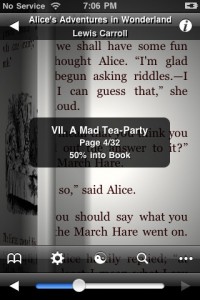 Unfortunately, the word that has been given is that this is the final update that we will be seeing for Stanza, as it is being given the shove off by Amazon. In reply to inquiries by a user, Amazon stated “we will no longer be updating or supporting Stanza… We would like to thank you for your interest in Stanza.”

So it looks like those of us that found much in Stanza to love will get one last spin with the app, until an OS update breaks it for good. I suppose that there is still hope that some of the features we love about it will end up in the Kindle app, but I wouldn’t hold your breath.