Usually when we get wind of a new app, the most we typically expect to see at launch is two – one for Android and one for iOS. But this next startup has just launched a whopping 41 in one fell swoop. Gulp.

Spotted by Locals has been around for a while already on iOS devices. In a nutshell, the apps offer up-to-date tips by locals across Europe. Prior to its entry into the app fraternity, Spotted by Locals was already active in the city-guide space, with an online version offering all the content for free, and PDF versions available for €2.99 each.

Now, the Dutch startup has launched its city guides for Android, with everywhere from Berlin and Bucharest, to Belgrade and Brussels catered for. We don’t want to list them all though…you can find them all here. I can’t help think it would’ve made more sense to have a single app that acts as a sort of wrapper, within which you download your city guides as required.

Before you read on, however, here’s the kicker. While the apps are free to download, you will only receive the latest five tips gratis. To get full access, you’ll need to part with a cool €3.99 through an in-app purchase.

While this little factoid is included in the app description on Google Play, it’s not that obvious and many people will simply download the app, only to then discover that this isn’t free.

Even on the iPhone app description page on its site, it says ‘free download’ (not a false statement in itself) with no suggestion that to properly use the app you really need to hand over money. This kind of hi-jinks tends to annoy people, hence it will likely draw in a slew of negative reviews for this reason alone.

Moving on, one of the key selling points of the Spotted by Locals apps (besides the fact that it’s informed by locals), is that its content is available entirely offline. No 3G or WiFi needed, which will be ideal for tourists arriving in a city from abroad.

The maps are available offline too, though you may have to readjust your map-using intuition – there’s no ‘pinch’ or ‘tap’ to zoom. You have to hit tiny ‘+’ and ‘-‘ buttons at the bottom, which will likely irk people accustomed to the Google Maps way of doing things.

Speaking of which, Google Maps announced offline maps for Android last month, something that will surely put at least a minor dent in Spotted by Locals’ armory, given that offline maps is a key selling point. 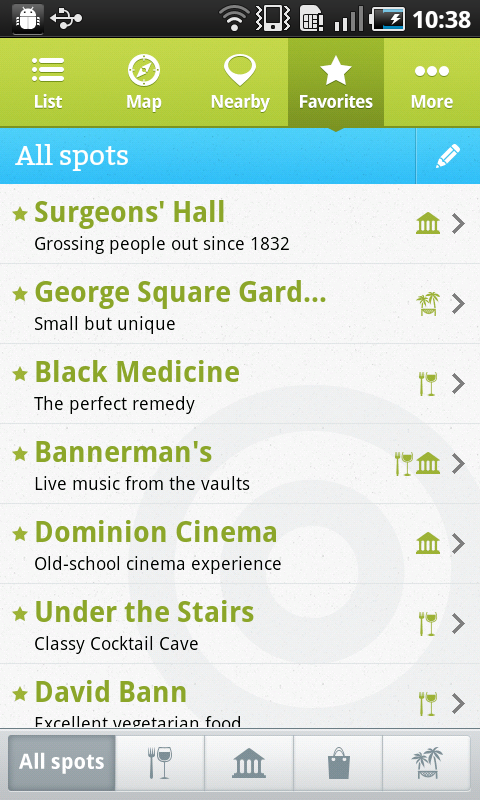 These gripes aside, Spotted by Locals is a really nicely designed app. And the service in general reminds me of Great Little Place (featured here), with its focus on input and suggestions from locals.

You can search via the default ‘All Spots’ option, which lists everything, or you can select ‘Eat and Drink’, ‘Art & Culture’, ‘Shop’ or ‘Relax’. Within each category, you can choose to view the choices plotted on a map, or in a list format ordered by distance. You can also save your favorites, so you can easily revisit them at a later point.

Spotted by Locals was started by Sanne & Bart van Poll, Amsterdam-based travel addicts. They actually meet all their “Spotters” in person, in their home city.

“By experiencing cities the local way, you learn about the culture and habits of the inhabitants,” the husband-and-wife team say. “We are convinced a better understanding of different cultures will make the world a better place. We think we can make a modest contribution!”

We’re told a Windows Phone (WP7) version will be released later this year, with no plans in place for BlackBerry.

Meanwhile, check out the official Spotted by Locals demo video below.