Spotify has gone from strength to strength since it launched in 2008, and last year its deep Facebook integration and US launch helped take the music-streaming service to the next level. From today, however, Spotify takes a pretty big step towards really establishing itself in the mainstream, as it rolls out a new embeddable button for bloggers and Web editors.

The Play Button will let you embed any Spotify song, album or playlist directly through your website. This essentially lets you tap 16 million tracks and let your readers play legal music directly on your website, much in the same way as you can do with YouTube videos.

“Today we’re giving every blogger and Web editor the ability to light up the Internet with music,” says Gustav Söderström, Chief Product Officer at Spotify. “Adding a personalised soundtrack to your website or blog has never been this easy.”

Indeed, Spotify has partnered with the likes of Tumblr, Time Out Group (NYC, Paris, London), GQ UK, Vogue, MSN, The Guardian, Virgin Media, The Independent, NME, ShareMyPlaylists.com and others, to let them offer the Play Button to their readers (and listeners) from today.

“You want to give your fans access to any song, album or playlist of your choosing and in its entirety, while ensuring people stay glued to your site”, continues Söderström. “The Spotify Play Button does all of this for free, while making sure artists get paid for every play.”

It’s probably also worth highlighting that the Spotify Play Button is now integrated into the Tumblr dashboard, and you can just type in the song or album you want and Tumblr makes the widget for you to fit with your blog’s theme.

“We deeply value music as a form of creative expression,” says David Karp, Tumblr founder and CEO. “That Spotify now 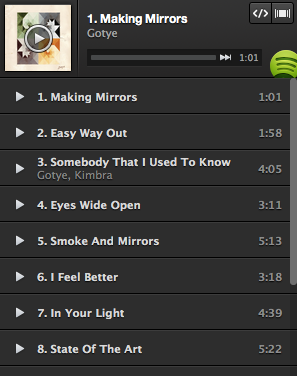 lets our users share from millions of their favourite songs is revolutionary, and as huge fans of the product we are absolutely overjoyed about this partnership.”

To get the Spotify Play Button for your website, you just grab any song, album or playlist URI from within Spotify and head to its developer website to get the embed link.

Spotify is still only available in thirteen countries – the USA, UK, Sweden, Finland, Norway, Denmark, France, Germany, Switzerland, Austria, Belgium, The Netherlands and Spain – and as such, the embeddable Spotify tracks will only be playable in these countries.

It’s also worth noting that you will also need the Spotify desktop app to use the button, as this is what powers it in the background.

For more information on the Spotify Play Button, click here.