Sparrow, the excellent mail client for iPhone, has been updated to version 1.1, bringing a host of new features, including a ‘send and archive’ feature and more. The Sparrow team has been busy, and says that it plans to continue to iterate the iPhone version of Sparrow just as fast as the Mac version.

The lack of push email in Sparrow has been a hot one, I mentioned it as the one thing I wasn’t so hot about in my review. Well, there is good news: Sparrow says that Apple might change its mind on push notifications for the app, but either way, it’s coming.

Thanks to your amazing support, we feel confident that Apple might revise its position on the Push API. We’ll submit a first version of Sparrow 1.2 including it. This might delay Sparrow 1.2 validation but we’re already working with some partners to include Push in future versions of Sparrow without needing Apple clearance.

Push is coming. With or without Apple.

I confirmed with Sparrow’s Dom Leca that the company is looking to make push happen, either with a third party or via a change in Apple policy. In its first attempt, the Sparrow team was essentially using an API reserved for VoIP apps in order to check for new emails. Apple predictably took umbrage and rejected the app. Adding it back will be tough, especially if the team wants to avoid running its own push server and all of the security mess that entails. 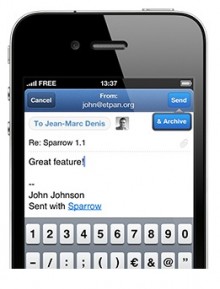 The new release brings a series of additions including:

The next update to Sparrow, version 1.2, will include localization in 9 languages, landscape mode when composing and will allow you to swipe up and down between messages.

There is also a brief mention of Sparrow 1.6 for Mac, which will bring POP support, allowing you to use Hotmail and other accounts with the client. Hopefully this will come to the iPhone version at some point too.