Do you know many invite-only websites with millions of users? Probably not many. Yet, this is the case of the Spanish social network Tuenti. With a whopping 12 million registered users, the site accounts for 15% of Spain’s Internet traffic.

Well, it may very soon account for an even larger share, as Tuenti is launching its own film rental service. According to Spain’s national broadcaster RTVE, the announcement was made in Sevilla by Tuenti’s VP of Corporate Affairs Sebastian Muriel during a social web conference called EBE.

According to RTVE, the beta version of the new service, called TuentiCine, will be available to 5,000 users, as of tomorrow. It will then be rolled out progressively from November 18th. Muriel insists the launch will be gradual, as the company will adapt its offer depending on user experience and feedback.

Although Muriel didn’t reveal how much users will have to pay to rent a movie on the platform, he mentioned that besides transactional VOD for individual titles, Tuenti is also planning to launch a subscription service “later on”.

Subscriptions are also Netflix’s business model, but it may take time before Tuenti has to compete directly with the American company. Indeed, while Netflix’s launch in Spain has been rumored for months and RTVE suggests it may happen in January 2012, it doesn’t seem to be on the agenda anymore.

Although the company has confirmed its launch in the UK and Ireland early next year following its expansion to Canada and Latin America, it also informed its shareholders last month that other expansion plans were postponed:

This delay represents an opportunity for Tuenti to move faster than its potential competitor. However, TuentiCine won’t operate in a competition-free environment, where local companies such as Filmin and Wuaki already offer legal alternatives to online film piracy.

While Muriel explained that the social network has signed deals with the main film distributors, he didn’t confirm how deep the catalogue would be. However, it wouldn’t be surprising if Tuenti was able to afford higher film rights than its indie competitors, as the giant telco Telefonica acquired 85% of the social network for 70m euros last year (see our previous story ‘Latin America accounts for almost half of Telefonica’s revenues’). 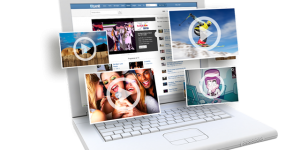 Thanks to its millions of users, Tuenti has already established itself as a leading video destination in Spain; its users watch 7m videos on the platform each day, according to the company.

Tuenti’s critical mass may well be its main asset to succeed in a market where others have struggled. Although Muriel doesn’t want to describe this move as a “war against free”, the company will need arguments for users to prefer TuentiCine to piracy – and the “social layer” is obviously one of them; as Muriel points out, “users will be able to share their impressions on the films they’ve seen with their closest contacts”.

In that sense, Tuenti’s strategy is similar to Facebook’s. Indeed, while it hosts more and more films thanks to deals with Hollywood studios, what really interest Facebook is the “share” element (see our story ‘Facebook doesn’t care where you watch movies, only where you share it‘).

What do you think of film rentals on social networks? Let us know in the comments.