Its most impressive feature, perhaps, is the 12 megapixel HD camera, which should blow the iPhone 4S’s already impressive 8MP camera out of the water. The Sony Xperia Ion is quite the fast shooter too, clocking in at less than two seconds per shot (back-to-back). Along with the killer main camera, you can also expect an HD front-facing camera, capable of stills and video in up to 720p. Both cameras are said to include many typical features like face recognition, smile capture, panorama, etc.

Other noteworthy details include Sony Xperia Ion’s support for specially ported Playstation games (it’s PlayStation certified), as in the Xperia PLAY, and the Sony Entertainment Network, which includes the Music Unlimited and Video Unlimited streaming/rental services. Sadly, the phone ships with the aging Android 2.3 Gingerbread, which is now over a year old. Sony is supposedly planning an ICS upgrade, but we’ll have to wait and see.

As if this phone wasn’t already built for media, it also packs HD screen sharing through DLNA, HDMI and BRAVIA Sync, in case you’re into that sort of thing. 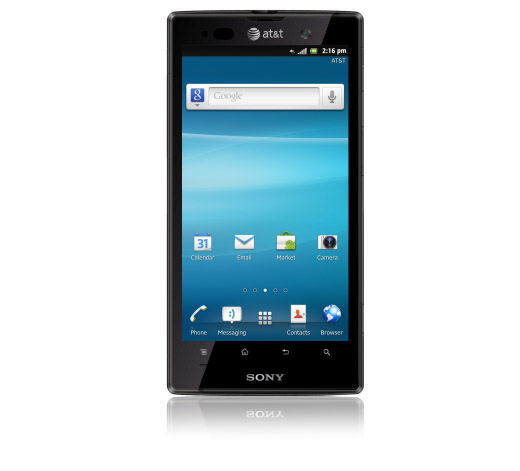