Rick Chin, a 3D design expert who describes himself as a software inventor who believes in making “products that matter,” knows as well as anyone that seeing is believing.

After all, the 3D design software company he works for, Mass.-based SolidWorks, is focused on the tools that help inventors and innovators bring their ideas to life and which has long been on the cutting edge of a world once dominated by engineers designing products on the drafting board with two-dimensional drafting tools.

Part of SolidWorks’ claim to fame is the fact that years ago, it combined the sleek functionality of 3D solid modeling – making the process of bringing a design to life even more expressive – with the user-friendly nature of a desktop computer.

Today, the company – really, its industry – is in the midst of a paradigm shift as its customers are increasingly interested in more cloud-based data storage and the ability to interact with the design data not unlike the way gamers do with something like the Xbox Kinect.

“While it’s not practical for engineers to stand in front of something like that for 8 hours a day, there are convergences of all this technology that are possible,” Chin said – via a phone conversation, while he was in California at a 3D user interface conference. “The energy here is just bubbling. Nobody knows precisely how it’s going to work out yet. Eventually we’ll start to see what sticks to the wall. Maybe it’s something like what the Xbox has with Kinect, as far as the new way for people to interact with the design data. But there’s definitely a platform shift taking place right now.”

At Facebook, there’s a programmer’s mantra that “code wins arguments.” Prototypes beat hypotheticals. Today, a little more than 1.7 million product designers and engineers in 80 countries use SolidWorks software to accomplish a version of the same thing.

“If you were to walk into a Target store, for example, probably a third if not more of the products you see, everything from home furnishings to athletic products, are designed using our data,” Chin said. “The big thing with us is we started off as a mainstream design tool geared toward small- to medium-sized businesses. Why do they choose SolidWorks? The accessibility of the product. It’s very affordable. It runs on mainstream hardware, and it’s really easy to use, compared to a lot of products. Entrepreneurs and inventors don’t always have a lot of money – SolidWorks came along, and they could run it on the computer they already had.”

Iconic guitar maker Fender once handcrafted its guitars using 2D design tools for years, but an acquisition in 2002 brought challenges that the company decided required 3D design technology to solve and to better drive manufacturing. Fender moved to SolidWorks software for its Jackson and Stratocaster lines, and now uses it companywide.

SolidWorks was founded in 1993, acquired by Dassault Systemes in 1997 and now has more than 800 employees, 23 worldwide offices and serves markets as diverse as alternative energy, medical, oil and gas and consumer products. SolidWorks posted revenue of $483 million in 2011.

SolidWorks’ competition includes companies like San Rafael-based Autodesk Inc., which has been around about a decade longer than SolidWorks and which is another big evangelist for 3D design software. Autodesk’s software has been used to design things like Tesla cars and the New York Freedom Tower – and Autodesk also has a “SketchBook” application that works on iPad and Android devices.

What’s interesting about SolidWorks is how excited an official like Chin gets about staying on the cutting edge of technology and innovation for the engineers and designers for whom the company creates products.For example, the company is increasingly eager to take advantage of possibilities as it relates to the cloud. 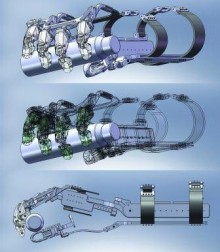 “We have desktop software that runs on Windows PCs, and you can now access your CAD info anywhere in the world, from any computer,” Chin said. “And there are a whole lot of challenges to accomplishing that. When engineers are designing new products, there are a couple of big major responsibilities, like coming up with the design and communicating that design. I need to be able to share this design with people so they can understand exactly what I’ve specified.

Apple veteran Tony Fadell, the so-called “Father of the iPod”, was the keynote speaker at the SolidWorks World 2012 conference in San Diego in February. It was a perfect fit, matching a design evangelist with a company that has a mission like SolidWorks’.