I don’t know about you, but I’ve got a bit of a love-hate relationship going on with headphones.

I love them insofar as I need them. I have three pairs, as it happens – one rather chunky set of over-ear headphones for home, which cost me around £30 ($50), I use them for listening to stuff on my laptop, or for Skype (they have a built-in mic). I also have a second, lighter over-ear pair that are foldable, which I use for going out running, or on holiday. And I have a third crappy in-ear set, for when I want to listen to a podcast in bed.

But I find headphones/earphones so frustrating in that it’s difficult to find the perfect set, and ones that last me longer than about six months. While I reckon I probably don’t take good enough care of them, which is why they break with alarming regularity, I’d be willing to spend a lot of money on a pair of really good quality headphones, if I knew for sure they’d stand the test of time.

With that in mind, I got wind of some funky-looking badboys from SOL Republic, called Tracks HD, which are billed as (virtually) indestructible.

They’ve been available in the US for a while already, but they only recently landed in Europe, so I thought I’d take them for a spin to see if they’re any good.

When you open up the box, you’ll not see a typical set of headphones. You’ll see a bunch of pieces that you get to construct yourself. But relax, we’re not talking about an IKEA wardrobe here…this will take you 20 seconds, if that.

There are 3 main parts to the headphones, plus a snazzy little case. The main band that will go over your head, is actually interchangeable, and you can procure different colors if you’re one of those fashion-conscious music fans.

You simply slide the band down the little slits in each ear-piece, plug the cable into the left and right one, and you’re pretty much good to go. They should now look a little something like this:

You’ll also be pleased to know that they come with a remote control built-in, plus a little microphone. So if you’re listening to your favorite tunes on your phone, these will also double as a hands-free headset.

It’s worth noting here, however, that Sol Republic’s Tracks HD are in fact built for iOS devices, which means the remote control is useless on your Android smartphone, laptop, and so on.

While that in itself is fine, my one gripe here is that this little factoid really isn’t that well publicized. Yes, there is a small note on the box that they’re “Made for iPod, iPhone and iPad”, but it doesn’t really say what that means anywhere. Indeed, in the instructions (which you really won’t need), there’s no mention of that, or on the main product description on its website. It’s quite conceivable someone could buy these without realizing that they’re made primarily for Apple devices.

Sure, but are they any good?

The quality of sound delivered by Tracks HD is stellar. While I’m no audio expert by any stretch of the imagination, I do know good sound when I hear it. Certainly compared to my pretty bog-standard Coloud headphones which I use at home, Sol Republic’s offering is in a different league.

The first thing I noticed was the bass – switching between Tracks HD and my normal set, it was like night and day. And it doesn’t really affect the treble all that much.

Coming in at around the $130/€130 mark, or your local currency equivalent, they’re not the cheapest on the market, which for some will be a mark of quality. But these aren’t Sennheisers, which recently rolled out some new extreme quality headphones of its own – we managed to test these out too. However, they’re more in the $300 price range, and that price can keep going up if you’re really dedicated to quality. 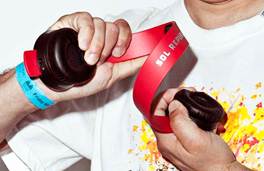 Finally, are these really indestructible? Well, part of me wants to do the acid test and reverse over them in my car, but I have a sneaking suspicion I’d regret it.

However, they’re completely malleable, thanks to the so-called FlexTech technology, and the end that connects to your device is certainly sturdier than cheaper headphones, which is where I normally end up with broken headphones.

Whether they stand the test of time remains to be seen, but they’re certainly a great set of headphones, both to listen to, look at and wear.

It’s worth noting they come in a range of both on-ear and in-ear versions. The standard models include the on-ear Tracks, Tracks HD, and Tracks Ultra, while in-ear Amps and Amps HD are also on the market.