Ride-sharing startup SideCar has updated its iOS and Android apps with a number of new features, including “detour mode” which lets riders modify routes, Facebook Connect login support, and a revamped rating system.

Competing against the likes of Uber and Lyft, SideCar is a service that turns everyone into a taxi driver. It uses a “pay what you want” model, whereby riders can specify the amount that they wish to “donate” to the driver. Anyone can be a driver, as long as they have a valid driver’s license, insurance, and a car. Currently the service is available in nine cities across the US, including San Francisco, Seattle, Los Angeles, Chicago, Boston, and Washington, DC.

One of the features that separates SideCar from Lyft and Uber is the ability for riders to choose their routes. In some cases, there may be a need to make multiple stops or to deviate from the original destination — things happen. The app now has a detour mode whereby riders can make changes to their journey without needing to “mentally adjust” their donation. SideCar says that its app will automatically compute a new suggested amount based on the time and distance traveled. 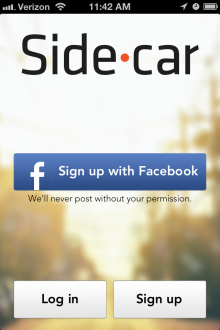 To help encourage more people to use the app while also making it easier to log into the system, SideCar has implemented Facebook Connect.

Being able to easily access the service is really important — while reviewing the app for this post, I wasn’t able to remember what password I had entered in,which is why Facebook Connect would have been helpful in simplifying things. There’s no word as to whether the company will enable Google+ Sign-In in the future, however. Users can still log in with their SideCar credentials if they choose not to utilize Facebook. 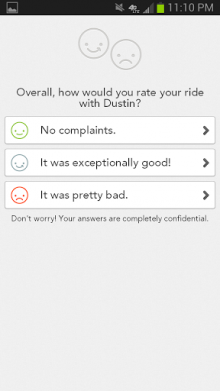 Lastly, the updated apps include a new rating system to rate drivers. Previously, riders evaluated their journey using a five-star rating. Now, the company is giving some additional options it hopes will make it easier for riders to share their feedback.

Sidecar is looking to expand its services to other markets besides the nine it’s in now. It tells us that 250,000 rides have been provided since February 2012.

However, just like the other ridesharing services, the company has found itself under regulatory scrutiny, including receiving a cease and desist letter in California. But things might be picking up for it, as California regulators approved a proposal to begin the process of reviewing and modifying existing transportation laws to accommodate Sidecar and other smartphone app services.