After teaming up with Spotify and Rdio, Shazam is strengthening its music discovery service through a new integration with Deezer.

If you’re using the app in the UK, Germany, Mexico or Brazil, you’ll soon be given the option to listen to your ‘Shazamed’ tracks instantly through Deezer’s music streaming service. It makes Shazam a far more useful tool, as it links the discovery service to another method of actually listening to your tracks. 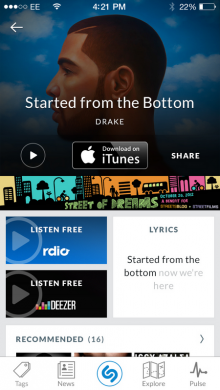 Shazam is also planning a major redesign of its mobile app, which will include better sharing options to Facebook, Twitter, Google+, WhatsApp and Pinterest, as well as overhauled album and track review pages. The company says you’ll also be able to see track lyrics “straight away” and jump across to the official music video if you prefer.

The redesign is expected to hit the iOS app first, with the Android roll-out following “in a couple of weeks.” Keep your eyes peeled.