Among the hullabaloo of phablets and virtual reality headsets at Samsung’s event today, another related nugget emerged from the vaults of Dropbox.

While Samsung and the cloud-storage giant have partnered for a number of years already to offer Dropbox pre-installed on some devices, including premium access, things are now being pushed to the next level. 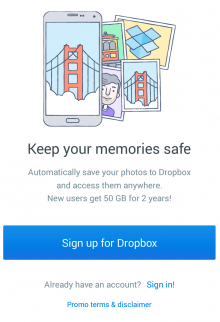 From the end of September, any new Samsung device you buy (including the just-launched Galaxy Note 4), will integrate more deeply with Dropbox at an app level.

For starters, you’ll be able to back up your photos directly from the Gallery app. This means you can view your Dropbox-stored photos in the app, thus preserving precious storage space on the device itself.

This same concept will be extended to the default mobile docs viewer and editor, meaning you can save documents directly to Dropbox.

➤  We’re doing even more with Samsung