RunRev, creator of the LiveCode cross-platform programming environment is planning to release an open source version of its platform that will be available for free.

Today, the company has launched a Kickstarter campaign that will turn a commercial product over to the open source community. RunRev hopes that if it is successful on Kickstarter, it will be able to offer an easy language to learn for many more people and enterprises through open source development collaboration.

The LiveCode platform allows users to create apps for mobile or desktop at professional or hobbyist levels. It was designed so that it is easy for people to learn and can deliver fast results. Once users write software once, they can deploy across platforms including iOS, Android, Mac, Windows and Linux. 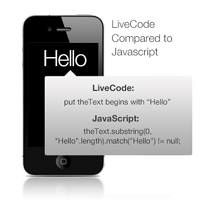 The company says that students as young as 12 years old as well as seasoned programmers make use of LiveCode. It hopes to support educators and small to medium-sized businesses with the open source version.

LiveCode is currently available as a commercial, closed-source product. With a successful Kickstarter campaign, the LiveCode open source edition will include the entire code base for all platforms, including the development environment and documentation. RunRev also will offer LiveCode Commercial for closed source application development.

With Kickstarter funding, RunRev will begin immediate updates to the LiveCode platform with a final delivery goal of Autumn 2013. Platform updates will include the reorganisation of  500,000 lines of C++ code, running on six platforms – Windows, Mac, Linux, iOS and Android.

LiveCode will also have a dedicated team extending its functionality and will engineer a new feature called “Open Language” that allows anyone to create a new command or function without having to touch the core. RunRev also hopes to include an updated drag-and-drop editor to speed up the creation of applications.

“This is exactly the right time for us to open our development environment to the community, allowing us to support educators and small businesses further and empower anyone in the world to code,” said Kevin Miller, CEO of RunRev. “Our aggressive goal of £350,000 to $500,000 in just 30 days will give us the resources we need to open the entire LiveCode language and visual development environment.”

RunRev notes that STEM (science, technology, engineering and maths) education could do with a boost. The company hopes that opening up a resource like LiveCode will help to educate more people and fill roles within this sector.

The firm has projected that more than 150,000 US computer science jobs will open up per year through to 2020 and only 40,000 graduates with the right qualifications are entering the workforce to fill those positions.

In Europe we recently learned that there are as many as 700,000 unfilled ICT jobs waiting for qualified personnel. So access to educational tools is a good start for finding new ways to gain skills.