Good news for fitness fanatics around the world – RunKeeper has rolled out version 3.2 for Android (iOS to follow), which is now localized for six new languages.

Thus far, RunKeeper has been available in English only. But now it’s available in Spanish, French, German, Italian, Brazilian Portuguese, and Japanese, this opens the app up to somewhere in the region of 800 million new users around the world who prefer to use their native tongue. 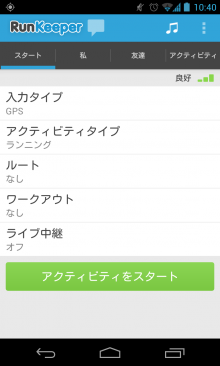 Of course, RunKeeper already claims 17 million users across 200 countries, so it seems that the language barrier hasn’t hindered uptake so far. But it will be interesting to see if this helps escalate downloads at all.

Going against RunKeeper’s usual way of working, this latest update is actually hitting Android first but the iPhone incarnation will receiving some multilingual loving shortly.

Today’s Android update also includes “enhanced displays” that show your goal-progress following each workout, as well as in-app live-sharing to Facebook and Twitter, fitness insights and badges for serious users.

To switch to one of the new languages, simply head to the settings tab where you’ll now see a languages option. It seems likely that more languages will be added in due course too.

RunKeeper 3.2 for Android is available to download any time now.