The UK-based viral agency, Rubber Republic, has launched a free app called TubeRank to help advertisers, agencies and anyone else to find inspiration on how best to create a viral video.

There are arguments that will say that viral spread is something unexpected that can only happen organically. There’s a lot of truth in this, but there are also things that video-makers can take into account in order to stack the odds in their favour.

Chris Quigley, MD of Rubber Republic told The Next Web about how experience can inform viral creation but the stakes are much higher now that there are so many people sharing content in so many places all over the Web.

“I started working in the viral industry ten or twelve years ago when I left University,” he said. “We call ourselves a Viral Agency and you say that to people and they tell you that you can’t make a viral, it’s something that just happens. We have that confidence though because we know how to make awesome content and we have a pedigree in it. You can make virals and to make them there are certain ingredients you need. That’s what we’re doing with the app.

Indeed Rubber Republic has been having a streak of hits lately. You may have already seen the Fiat Motherhood rap advert, Mercedes Catch, Peugeot vs Nonstop and the Bodyform Response which we featured back in October last year.

TubeRank’s been 12 months in the making, and initially started as a research project called the *LOL_Project* aimed at finding out from ad agency creatives and planners their thoughts on the science of sharing and what makes a video viral. More than 45 interviews were conducted and this led to the first version of TubeRank out today.

TubeRank offers users a selection of toggles and options to suit the message or style they are interested in working with, and then see existing videos that have been relatively successful as an inspiration.

The videos are drawn from the RSS feeds of influencers. Rubber Republic then adds a layer of meta data so that they can be searched using the trigger sliders.

At launch the app is free and Quigley says that he may move to a freemium model for agencies to provide more in depth insight and data. Check the video for a short explanation.

The ads and videos are ranked on how many times they are shared for each time it is viewed. A video that has 20 million views may have been poorly shared or have paid-for media behind it. This means the results show how natural or organic the viral results for the videos have been. 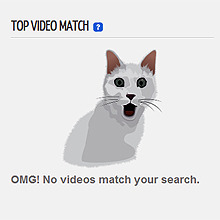 In the event that you should create a combination that does not produce a video result, Rubber Republic has this covered with a familiar Internet meme to let you know as shown in the picture to the right.

Having a chat with a viral-maker, we had to ask about how he thinks virals are made and how they can be a success.

“There are two core ingredients to designing something that will go viral; understanding who is going to share the content and why they are going to share it,” he explained. “These are conversation triggers. If you deconstruct any shareable video you will see those two things very clearly. That’s how we reconstruct our ideas. We come up with ideas, analyze them within a framework and then try to improve them to include those triggers that are relevant to the communities of interest.”

So why invest in trying to get a video to go viral and what precisely is the result? “Making a viral video is about getting people engaged with your brand and your product in a way that people want to advocate you,” says Quigley. “Viral is the oldest form advertising, it’s basically word of mouth. the point is to get people sharing or telling their friends about this great video. There is a question there about how you manage to integrate your brand into a video and that can be an art in itself. going viral is basically being so awesome that people want to talk about you and share you.”

There’s a pretty penny put down for a good video this days. As mentioned, the competition is fierce with so many creators putting their material online. But Quigley says that virals can be made on a budget and there have been some really nice success stories.

“A great example of this is Dollar Shave Club,” he says. “That ad was articulating the character of the business through the founder, he’s the hero of the video. It’s down to getting the idea right. Dollar Shave had a relatively small budget but the founder has experience in marketing and so he had a big advantage.”

Knowing your audience can also bring down the costs of making something that people want to share. Quigley notes that Dropbox went viral by putting Easter eggs in the product that would appeal to the audience. This makes sense given his explanation about knowing the community you want to reach.

With many neat examples to watch on the app, it might be tempting to take an existing viral and incorporate it into a campaign. But this method can be divisive and again depends a lot on who the target audience is.

“The Fenton-related viral by Everything Everywhere was interesting,” says Quigley. “I saw it when it had just launched and seeded organically. You’d look down the comment stream and it was getting a lot of flack from the organic meme community.

“But then when it had paid seeding behind it, the comments were completely different,” he continued. “It reached a more mainstream audience and there was a lot of praise for it. There is a divide and the purist meme lovers are more sensitive because it’s their holy ground, whereas the wider community will enjoy something if it is well done.”

Virals that don’t work are unlikely to be harmful other than trying to recoup the costs and time put into them. However a bad viral video can be quite destructive. Quigley says there is very little you can do about this once it is out unless the video is taken down quickly.

But even with an interesting viral there can be a lot of criticism. Quigley says this is par for the course. “You need to understand who is flaming you and be thick-skinned. There are so many haters out there and they will hate whatever the weather. You have to be happy to take flack – it’s the Internet.”