The first reviews of the Apple Watch are out now. With pre-orders opening in just a couple of days, it’s worth finding out if the device is really all that.

We’ve scoured the Web for comments on Apple’s first wearable, and here’s what we found.

“The Apple Watch is still a smartwatch, and it’s not clear that anyone’s yet figured out what smartwatches are actually for.” — The Verge

The Verge’s Editor-in-Chief Nilay Patel feels that the Apple Watch is a beautifully crafted device and is perhaps the nicest smartwatch on the market, but it’s unfocused in what it can and should do for users.

He also found it to be slow, particularly when loading content and data from phone apps like Uber and Twitter. However, it does help out check out of stores with Apple Pay fairly quickly.

Patel adds that if you’re looking to buy an Apple Watch, the $349 Sport version is the one to go for.

Apple blogger John Gruber notes that the Watch is a breakthrough device, but feels like the company will have a hard time winning over people who are used to wearing watches to tell time.

However, Gruber believes that the Watch’s novel input and output systems will herald a revolution in wearable tech. In classic Daring Fireball fashion, he takes note of minute details like the “bounce” animation that plays on screen in tandem with haptic feedback on the digital crown when scrolling to the end of a list — which feels much more real than on the iPhone.

Gruber is also excited about how Apple is exploring new ways for people to connect with each other through touch. “With digital touch on Apple Watch, it feels, in a very real sense, like you’re touching and being touched by another person,” he says.

“The big reason many people — even many Apple fans — will skip the Apple Watch is that it’s too new.” — The Wall Street Journal

The Wall Street Journal’s Geoffrey Fowler felt the Apple Watch’s discreet notifications helped free him from his oppressive phone. The ability to query Siri and answer calls on his wrist also enabled him to keep his phone in his pocket and off the table.

He also noted that its design suited both men and women just fine — a feat most other smartwatches haven’t been able to achieve.

For Fowler, the main drawback of the Apple Watch was the lack of apps for the device — although the company says more than 1,000 Watch apps have been submitted for approval, there are only about three dozen available to use for now.

“What hinders many of the experiences is that the watch must pull information from the phone, leaving you with a spinning wheel that indicates data loading, rather than a quick hit of info.” — Bloomberg

Although Bloomberg’s Joshua Topolsky concludes that Apple has made “something that lives up to the company’s reputation as an innovator and raised the bar for a whole new class of devices,” he’s not convinced that he needs it on his wrist every day.

Topolsky found that checking email and text messages on the Watch saved him some time, but had mixed feelings about its other functions.

He says that the Activity app for tracking your fitness goals is frictionless to set up and use, but the heartbeat and drawing features for communicating with other Watch users weren’t as nifty in real life as on paper.

“In our new world of too-many-devices, it somehow becomes the second thing you reach for when you roll out of bed.” — Recode

Recode’s Lauren Goode spent a week with the $549 stainless steel version of the Apple Watch, and enjoyed having quick access to her messages and photos on the device. She’s a fan of larger timepieces, and found the Watch’s 42-millimeter to be just the right size.

Goode says that it takes a couple of days to get used to the Watch’s digital crown, Force Touch and other idiosyncrasies, but after that, it makes perfect sense whether you’re controlling iTunes or swiping through notifications.

She also notes that the Watch offers a full day battery life, and often outlasted her iPhone. That includes using the device to control music playback, get turn-by-turn directions and manage her messages. 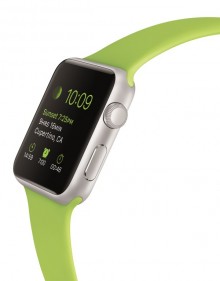 “The Watch is just useful enough to prove that the tech industry’s fixation on computers that people can wear may soon bear fruit.” — The New York Times

The New York Times’ Farhad Manjoo compares using the Apple Watch to his experience with the first iPhone, in that it showed off the possibilities of a connected mobile device.

Manjoo says that the Watch’s distinct “taptic engine” vibration patterns for various notifications like calls, texts and calendar events helped him get information from his digital world without having to glance at the device.

He adds that he also got used to calling on Siri at home or in the car, but getting through to the digital assistant wasn’t always a sure thing.

In the end, Manjoo concludes, “The first Apple Watch may not be for you — but someday soon, it will change your world.”

“Is my life better because of it? It’s too soon to tell. But what I do know is that I thoroughly enjoy wearing it.” — Mashable

Lance Ulanoff of Mashable discusses the Watch’s design and build at length, noting that the device is exquisitely crafted down to every last detail, including little buttons on each segment of the stainless steel version’s band that make them easy to remove.

Ulanoff adds that using the Watch to pay for groceries and check in at the airport was easy and got quite a reaction every time. However, he mentions that the device’s S1 chip ocassionaly lagged and spoiled the fun.

He also felt that the Watch was unmatched in terms of design elegance and comfort, as compared to other smartwatches like the Moto 360 and the LG G Watch R.

The Wall Street Journal has a handy printable PDF with cutouts of the most popular smartwatches available today, so you can see how they’ll fit on your wrist.