The Romibo Robot Project is a pet-like social robot designed for therapy, education and fun. It was created by the Carnegie Mellon research group and Origami Robotics, and utilizes the AuRoRa Project’s open source robotic platform.

This furry little robot reacts to its surroundings and expresses emotions. It caters towards therapeutic use with special needs children ages 2-8 years old, but since it will be an open platform (upon release later this year), it has the potential to be used for wider education projects as well.

The decision to ship as a DIY project lowers the cost for parents and encourages users to develop their own experiences. The team also hopes to provide value to STEM (Science, Technology, Engineering, Mathematics) education initiatives.

Once the robot is released, Romibo hopes to grow a development community around it, where designs and experiences can be shared and used towards future projects. It hopes to be able to rely on contributors to help with co-development and research, all while sharing in the fun.

The DIY component consists of flat-pack kit able to be assembled by a neuro-typical child 10+ and a parent for education and creative play. The kit design allows us to make the robot accessible to a broad audience while reducing production costs. Our website will allow kit-builders to contribute their customized designs and experiences to the research and development of future robots.

The project has been publicly in development for the past few months, and was showcased at the Pittsburgh Mini Maker Faire under its original name, “MEmote”. Most recently it debuted at CES 2012 in Las Vegas, and should be released later on this year! 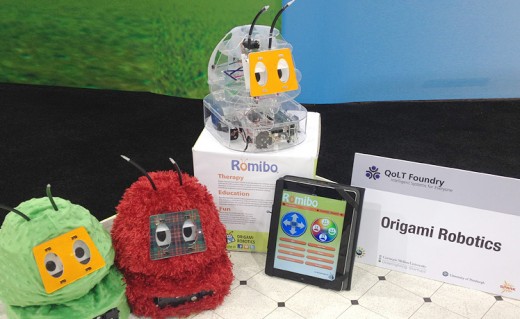 Romibo… are simple in design — just fabric and moving eyes on a gum-dropped-shaped robot. That’s it. The customizable robots lack typical facial features like mouths and ears to avoid visually overwhelming autistic children. The therapy comes mostly from the eyes. With what the researchers believe to be the “windows into the soul,” the robots react by moving their synthetic eyes in response to children’s movements and sounds picked-up by its sensors.

For instance, if a child yells at a Romibo and pushes it away, the robot reacts by showing that it’s hurt. These isolated interactions are teaching moments for the children, and gradually become more complex and human-like until children are able to cope with nuanced and unpredictable everyday life.

Romibo certainly shows great potential for the future of robotic therapy, and the DIY component should result in some interesting modifications. For more information, check out the official Romibo website, and sign up for the mailing list below!