There are few things you can do to upgrade your home theater experience like adding a pair of height speakers. Whether you’re listening to Dolby Atmos, DTS:X, or Auro 3D, the added vertical dimension makes the sound more immersive and helps transport you to the scenes on film. But while most speakers designed for Atmos compromise on the acoustics, SVS’ $400 Prime Elevation are good enough to deserve a spot in almost any part of your home theater setup.

Dolby Atmos speakers usually fall into two categories: speakers meant to be embedded in a ceiling or speakers that are placed atop your left and right channels and bounce sound off the ceiling. The former is too involved for most people to deal with, especially renters. The latter – usually branded as ‘Atmos enabled’ speakers – are far more convenient at the expense of acoustic compromise. Dolby says they “produce slightly diffuse overhead audio that is quite lifelike and, in some cases, preferable to the sound that comes from overhead speakers,” but in practice, the situation is messier:

Audioholics has a great write-up detailing some of the problems with ceiling-bounce speakers here. While I’ve heard ceiling-bounce speakers sound convincing in controlled settings, there are too many variables that need to line up. With irregular ceilings in my own home, I have been unable to get Atmos-enabled speakers to provide a satisfactory height effect, so I mount them above my couch instead.

With the Prime Elevation, SVS opted to create something more convenient than in-ceiling speakers while avoiding the pitfalls of ceiling-bounce speakers. The Prime Elevation are angled in a way that makes them convenient for use high on your walls, but their design also makes them useful for overcoming a variety of placement issues in a typical home. That, combined with a high-quality, neutral tonality means they are versatile enough to fulfill most roles in a typical home theater setup.

The quality extends to the design. The glossy white model I reviewed sported a classy fit and finish –  a small speaker with a reassuring heft that belies its price. The grilles can be removed, but should you choose to leave them on, SVS has a removable magnetic logo that can be reoriented depending on how you intend to use the speaker – a clever touch.

Also clever is the mounting mechanism. Its angled screw slots allow you to mount the speaker in pretty much any useful direction. An optional (but free) ceiling mount keeps the speakers in place should you want to install them directly overhead. With four screws holding up the eight-pound speaker, you should be fine hitting a stud or using a decent set of anchors.

For most of my testing, I listened with one pair of Prime Elevations above my couch and another behind it in a 4.1.2 setup (I normally prefer not to use a center channel). Connected to a Yamaha RX-A3080 receiver, the difference from my previous height speakers was obvious. This is not at a fair comparison as the Sony SSCSE I used were far cheaper at $200 a pair, but I make the comparison because I’d once assumed I wouldn’t care all that much about the quality of my surround speakers. I was wrong.

Even though their placement still wasn’t totally ideal in my home – there are joists a few inches in front of the woofers – the improvement was palpable. Atmos content now displays an altogether new level of realism, and the Prime Elevations better matched the neutral timbre of the KEF R3 and Q Acoustics 3020i that were my left and right channels during most of my testing.

The improvement became more apparent when listening to music. The ‘CinemaDSP’ modes in Yamaha receivers expand stereo music to all channels while replicating the reverberant properties of different spaces – like a jazz club, symphony hall, or cathedral. While I’d originally thought these modes a gimmick, I found them far more convincing when using the Prime Elevations. Hearing reverberations pass overhead while listening to choral music with the Prime Elevations was eerily realistic.

Satisfied with their surround performance, I spent a few days trying them as left and right channels. This was perhaps what impressed me the most – they just sounded like ‘real’ speakers. Again, the tonality was mostly neutral, albeit perhaps a little forward in the midrange region. They threw out a large soundstage with greater punchiness than I expected from a small woofer and cabinet. You won’t get the dynamics and thump of a larger speaker, but it should suffice for a small room or close listening distances, especially when paired with a subwoofer I had no particular complaints from my listening position 8 feet away.

The angled design works for more than Atmos too. While many audio enthusiasts will place their left and right speakers on stands to elevate the tweeter to ear height, others simply place the speakers on their TV console or surrounding furniture for aesthetic or space reasons. If this is you, the Prime Elevation’s design can come in handy, as it will angle the sound roughly towards your ear at typical listening distances. It’s particularly useful in the center channel, which usually lies below your TV or projector, although the Prime Elevations will likely be too tall to fit under a TV on a stand. Alternatively, the speakers can be mounted slightly above your TV and angled downwards.

Putting them through the test bench, I captured the Prime Elevation’s frequency response performance using a measurement technique that simulates the results you might get in an anechoic chamber. I then rotate the speaker around the tweeter axis to capture the sound radiating at various angles since we don’t just hear the sound. The results are in the gallery below. 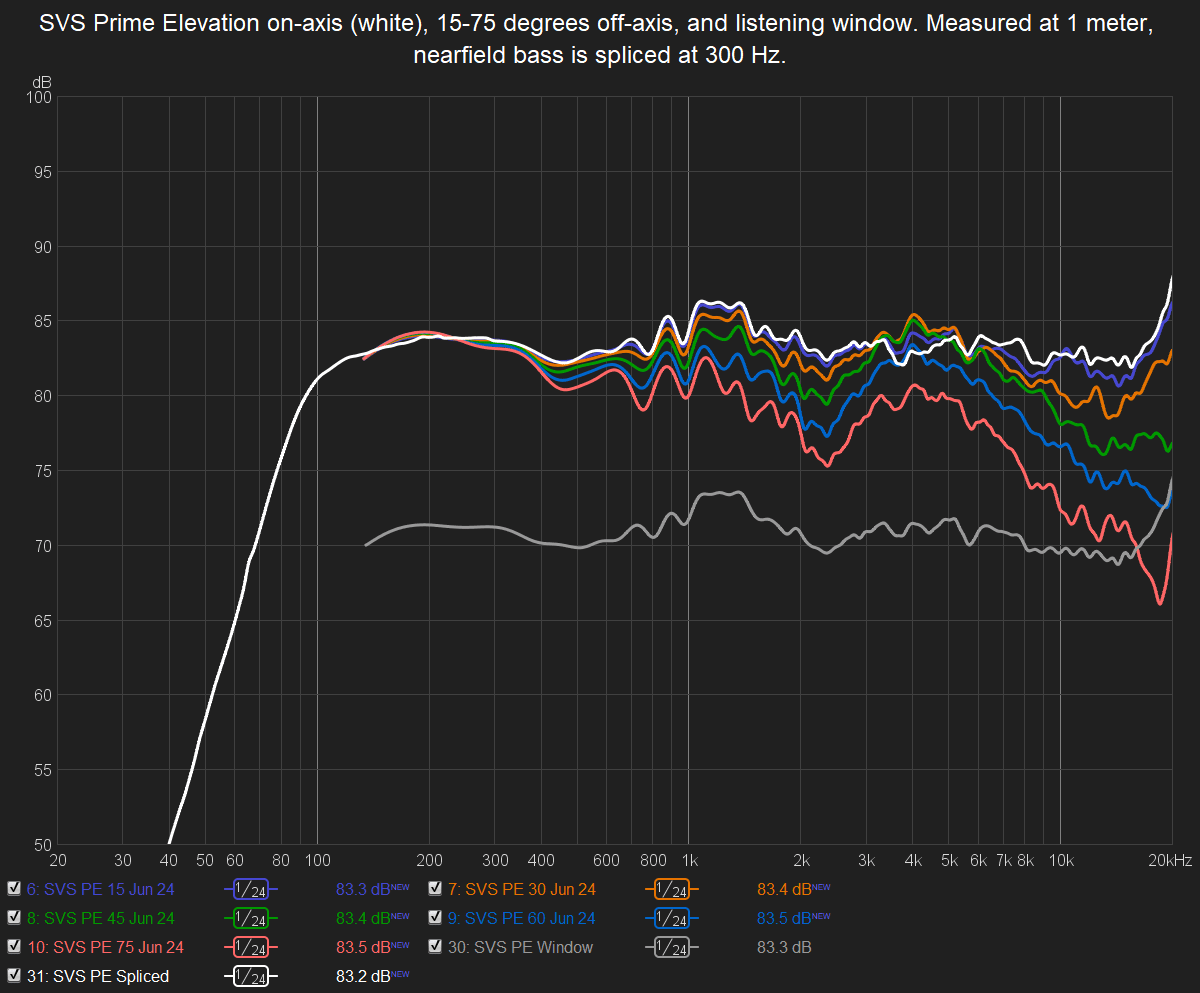 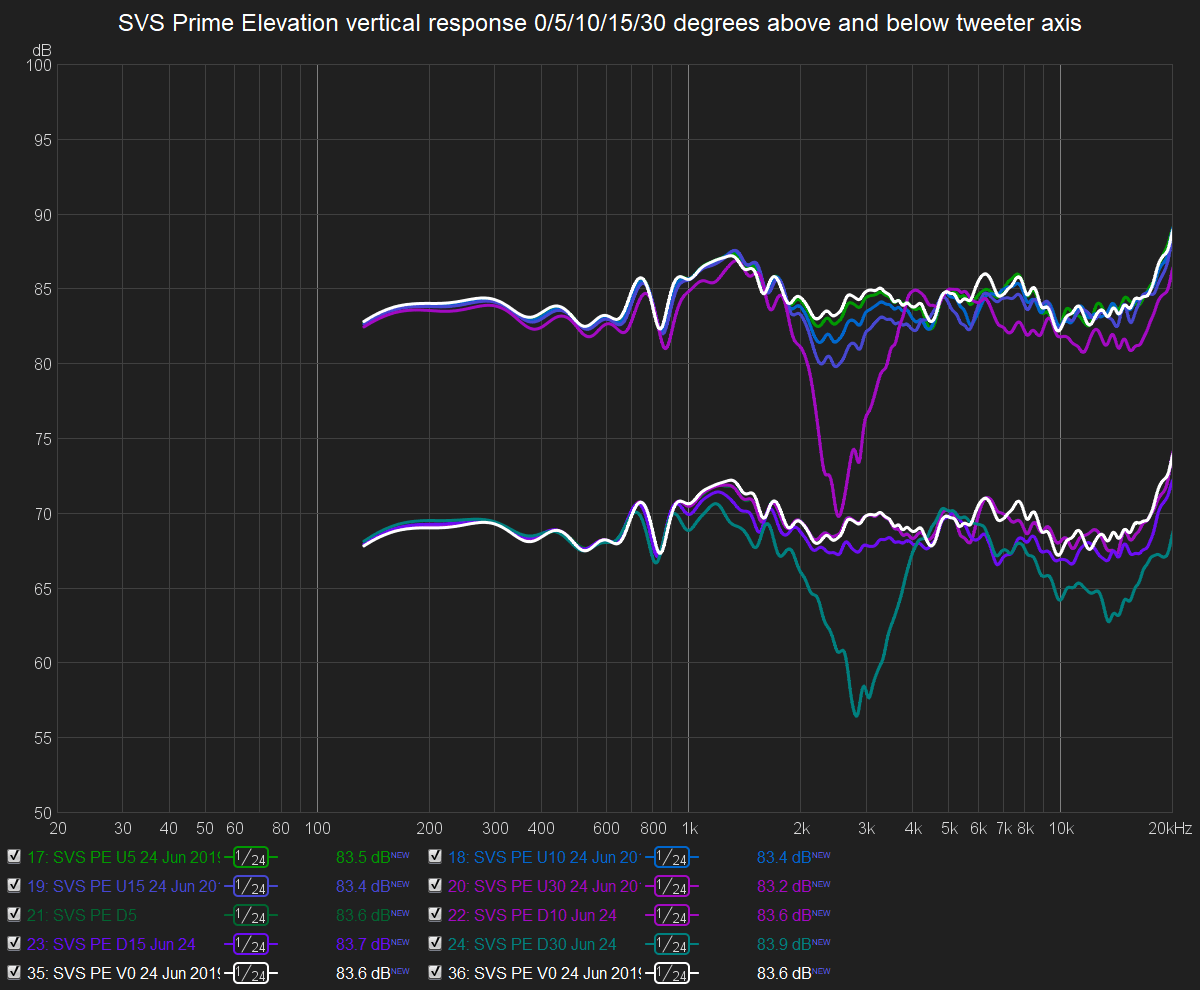 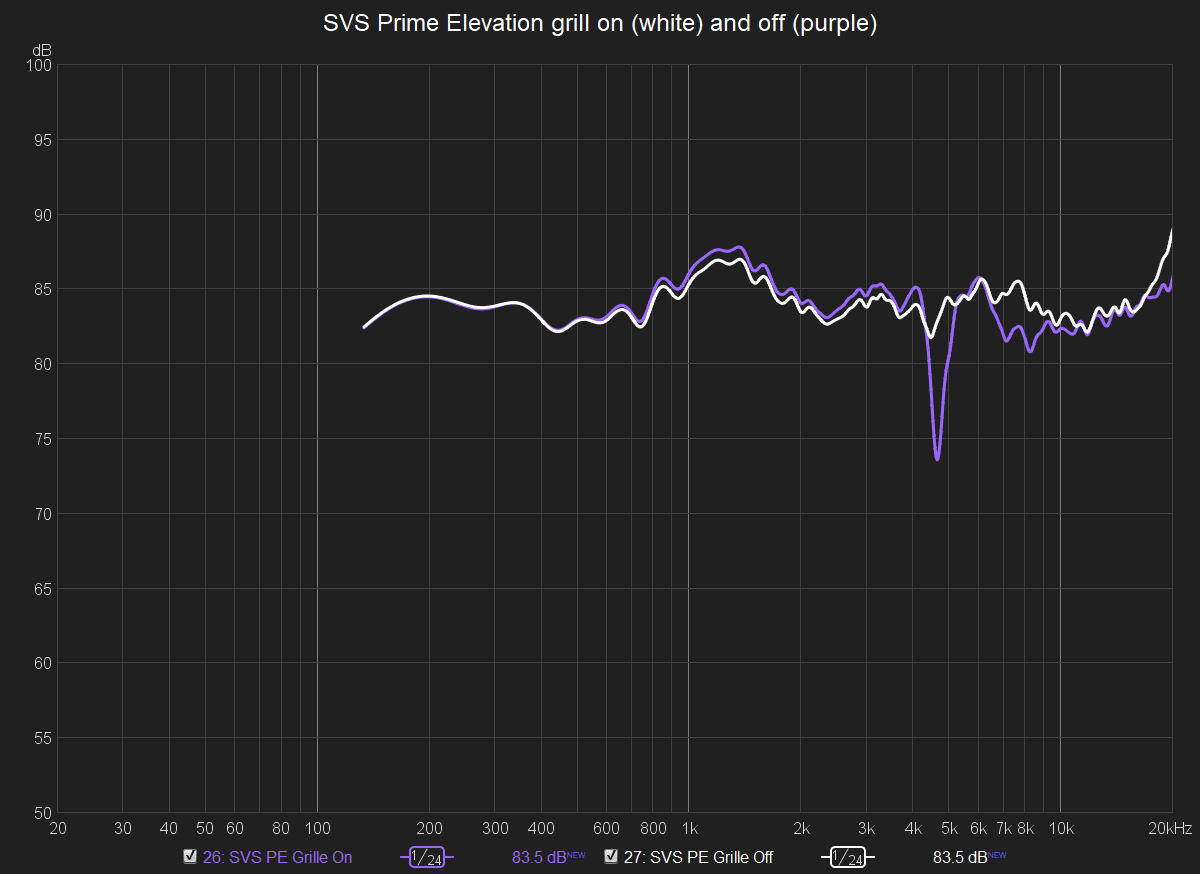 Keep in mind the measurements are made with the speaker baffle angled to be perpendicular to the microphone – this assumes you’re listening with the speaker pointed towards you. These measurements are also reflective of their use in free space, rather than their intended use adjacent to one or two surfaces. Still, they should provide an idea of their performance characteristics.

Other than that bump in the midrange at 1KHz it’s an impressively flat response on-axis – indicating SVS wasn’t slacking just because they’re meant as surround speakers.

For reference on how ‘flat’ a speaker can be, you can check out my measurements of the $800 Neumann KH80. It’s a studio monitor which uses digital signal processing to achieve a ruler flat response.

The horizontal off-axis measurements are spaced closely together, suggesting a wide dispersion. You won’t get much in the way of bass if using them as left and right speakers, but of course, that’s to be expected. Placement adjacent to a wall and ceiling in a typical Atmos setup will tend to reinforce the bass.

If you do plan on using them as your front speakers, I did try pairing them with an SVS SB-1000 subwoofer, crossed over at 100Hz. In this typical home theater scenario, the Prime Elevation performed in a manner that I suspect would put many larger speakers to shame.

Of course, many of the Prime Elevation’s benefits can be achieved by simply buying angled mounts and stands with tilting abilities. The Elevations themselves have a 1/4″ brass insert if you want to you alternate mounting options. But if you factor in the price of mounts, you’d be pretty hard pressed to find this combination of sound quality, versatility, and price elsewhere.

It’s no surprise that the Prime Elevations are SVS’ best selling speaker. Though the cost will quickly add up if building a larger home theater system, they’re versatile, easy to integrate with other speakers, and can help solve placement issues in all sorts of rooms. Starting at $400, whether you’re looking to expand your home theater setup or are building one from scratch, the Prime Elevation are an easy recommendation.

Whether or not we like a product, TNW gets a small cut of the revenue if you buy it through our affiliate link. This isn’t a sponsored post, but for the sake of transparency, you deserve to know what’s up.