If you’re a PC gamer, chances are the average laptop screen or monitor doesn’t cut it. For shooter, strategy and fighting games in particular, the average screen is often simply too slow. On the other hand, that speed often comes at the expense of image quality.

Samsung announced its CFG70 monitors in August, and I’ve had the chance to use the monitor at home for a few weeks. The monitor achieves the difficult feat of mostly fitting my needs both as a gamer and a photographer.

Setting up the monitor is easy – basically a matter of dropping it into its swiveling arm stand.

It’s the most versatile stand I’ve used too; though most allow for some height, swivel, and tilt adjustment, Samsung’s also has convenient motion in the Z axis for bringing the screen closer or further, as well as generally a wider range in the other dimensions as well. You can also rotate the screen for use in portrait mode, which I appreciated when editing photos.

All these adjustments are easy to make with one hand. My one complaint about the arm mount is that you do have leave a fair bit of space behind the monitor, so keep that in mind if you’re buying it for use in tight quarters.

You navigate menus with a little tilting knob on the back of the display. The menus are intuitive and easy to navigate – including quick overview of your speed settings – and there are three customizable preset buttons under the display as well.

I’m grateful the display is free of the usual gaming accents with a subdued black design. It doesn’t scream “GAMER ALERT” the moment you step into a room.

The one flashy bit is a glowing blue light under the display. You can set it to pulse, interact with gameplay sounds, or turn off altogether. I would’ve liked to be able to keep it on permanently, but no luck, so I just turned it off as it was otherwise distracting.

There are no built in speakers, so you’ll have to provide your own or use headphones.

In a rare turn of events, the specs really do tell most of the story, without many significant qualms or caveats.

Unlike some curved monitors that I’ve seen, there was basically no light leakage. Blacks have a bit of a ‘glow’ but are also on par or better than most IPS panels. Contrast is excellent, as are colors and viewing angles. There’s some washing out at extreme angles, but this is largely mitigated by the curvature of the display.

I didn’t have the equipment for quantitative testing on hand, but it’s obviously excellent performance throughout for a monitor that’s not specifically aimed at photographers or other media professionals who value accuracy. Though other gaming monitors offer similar responsiveness and lower prices, I’ve not seen anything else with this degree of color reproduction yet.

With an excellent stated 125 percent of sRGB coverage (Tom’s Guide actually tested it at 151 percent), I just wish it included some other presets like AdobeRGB or DCI-P3 for those of us who need it.

I used it alongside Dell’s quite impeccable 4k (and $1,300) UP3216q, and the Samsung had noticeably better contrast (3000:1 vs 1000:1), with very comparable colors in most apps and games. Colors from the Dell were better with apps that could take advantage of the color management, as you’d imagine, but Samsung puts in an impressive performance for a $350 monitor. 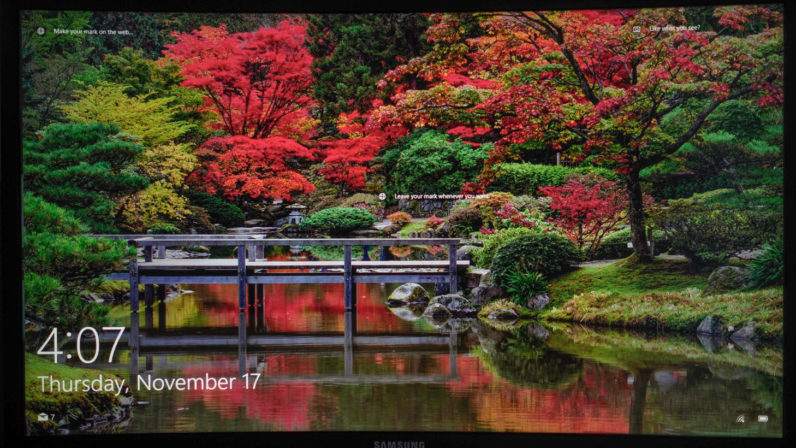 Then there’s the matter of Samsung’s choice of resolution. After staring at phones, tablets, and laptops with 1440+ screens, seeing 1080p stretched to 24 inches does accentuate the relatively low DPI – it’s why I chose to review the smaller model instead of the 27 inch one. At its price, it would’ve been nice to see at least QHD.

Still, most people still use 1080p TVs at home, which sit further but are much larger; it all depends on your expectations. I miss the resolution when editing photos (my Surface Book’s display is 3000 x 2000), but the excellent colors balance that out.

Of course, Samsung expects most of the monitor’s buyers to be gamers, many of whom don’t need or care for a high resolution screen, especially in the competitive arena. Speed and responsiveness come before tiny details that will likely get lost in the heat of game play anyway.

Though they don’t necessary play every game with such settings, a quick gander at this list of settings for professional Counter-Strike: Global Offensive players shows most of them play at 1024 x 768. Even in non competitive games, I’d much rather use better lighting and effects than high resolution. Point is, speed is often more valuable than resolution.

And speedy this monitor is. If you’ve never used a monitor with a high refresh rate and low response time, the experience can be a little jarring at first. At 144Hz, it almost looks like your own mouse motions are being fast-forwarded. But once you’re used to it, it’s hard to go back.

(For some reason only DisplayPort could hit 144hz; HDMI maxed out at 120hz, though few people would notice a difference.)

Most of my testing was done playing CS:GO from my Surface Book (the original 940M-based model) which can maintain framerates above 144 fps pretty smoothly at low settings. That also means I didn’t get to test AMD’s Freesync, but that hardly matters at this framerate. FreeSync is more useful if you’re playing a slower game with higher quality settings where you can hardly hit the max FPS.

I can’t promise the monitor will make you a better gamer, but after several hours of gameplay on the Dell, Samsung, and Surface screens, I consistently fared better on the Samsung.

Naturally, the refresh rate made motion look more lifelike. Input lag was completely imperceptible in both CS:GO and Smash Bros Wii U, and I couldn’t see any ghosting with the ‘Fastest’ response time setting (there are three levels). Even with the slowest ‘Normal’ setting, you’d be very hard pressed to see any artifacts. It’s also worth noting the ‘Fastest’ settings locks your brightness, however.

As for that curve: I’ve never had strong feelings about curved displays, but I find it useful here. Your eyes are closer to the screen, and it helps everything feel just slightly more immersive, while keeping your eyes relatively equidistant from every part of the screen.

Moreover, the stand’s Z-axis motion makes it easy to pull the screen towards your face in the middle of a game, effectively making it feel larger. I’d normally say the curvature is an unnecessary feature, but given it presents no noticeable disadvantages, I’m glad to have it here.

The CFG70 does everything it claims to do, and it does it well. As you’d guess from the spec sheet, it’s extremely responsive, but what’s more surprising is how good the monitor is when you’re not shooting pixelated people in the head.

As long as you don’t mind the resolution and don’t need exacting calibration settings, the colors, contrast, uniformity and flexibility make the CFG70 one of your best options for a gaming monitor, and a pretty darn good monitor in general.

Keep in mind there are cheaper options out there if you just need something with a fast refresh rate and decent image quality from a myriad of brands like ViewSonic, BenQ, AOC, Asus, and others, but you’ll be hard-pressed to find something with quite the combination of features and quality on the CFG70.