This article was published on November 10, 2018

Mechanical keyboards are the kind of product the adage “you get what you pay for” was created to describe. The best cost $200 or more. Quality gets pretty hit-or-miss once you dip below the $100 range. And at less than $75 you can assume you’re getting something from the bargain bin. Luckily, there’s a little-known company named Aukey quietly changing that with its pretty-damn-good $65 KM-G3.

The KM-G3 is a blue switch (Outemu, not Cherry MX), 104-Key RGB Backlit Gaming Keyboard with Customizable Lighting Effects. What that means for non-techies is that it’s a loud, semi-stiff keyboard that’s way better than the stock keyboard that comes with most desktops. And, of course, it lights up. Because gamers love lights.

Actually, Aukey uses the lights on the KM-G3 to excellent effect. They’re well-implemented, and I enjoyed the fact that the colors, brightness, and effects are all handled with simple keyboard shortcuts, no software needed.

But let’s start with the looks, then we’ll get into the technical side of things. The KM-G3’s design is pretty familiar:

On the right is the KM-G3, on the left is the Logitech G513. Now, this isn’t to say the KM is copying the G513. The minimalist aluminum-top design is going to have some over lap between brands because it’s attempting to have the smallest footprint possible. And Aukey could do a lot worse than imitating the G513: it’s among the finest mechanical keyboards there are.

The KM-G3 costs less than half as much as the G513, however, so there’s that.

Unfortunately, where the KM-G3 does decide to zig instead of zag it mostly ends up looking silly. I can’t say I’m a fan of the font Aukey chose to go with on the device’s keys.

It feels like its designers were embracing the gamer vibe with flashy lights and a far-out font, but where the lights work pretty well, the font is a distraction at best.

And, aside from the font, there are other ugly reminders that this isn’t a premium product. From most angles you can see white hardware poking through beneath the keys, which takes a lot away from the sleek overall look of the black backlit keys on a black aluminum/plastic case. Similarly, a screw top sits on top of the frame, centered between the ESC and F1 keys and sticking out like a sore thumb. 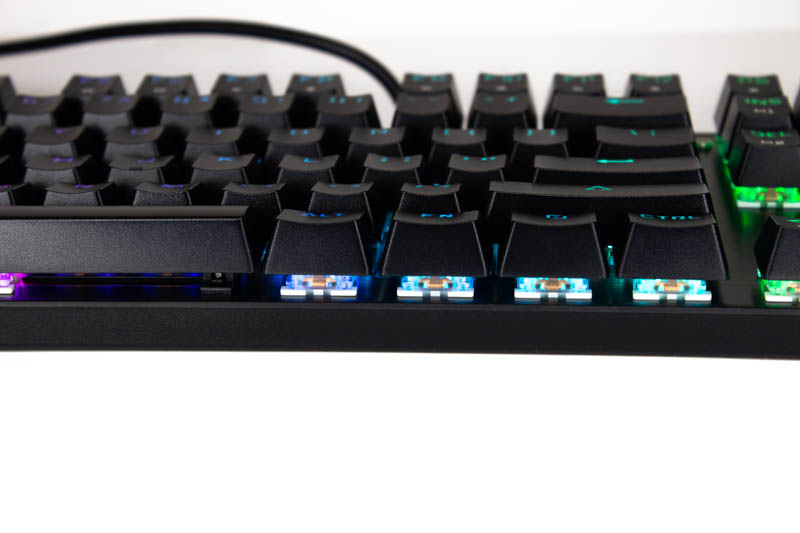 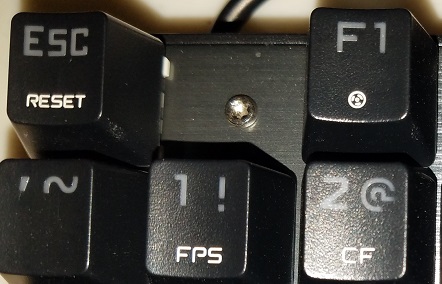 But, these aesthetic concerns are trivial. The device will look just fine sitting on your desk and, as long as you enjoy such things, the lights are cool enough to compensate.

In use, it’s not bad. The keys are a bit wobblier than a premium keyboard, but you won’t notice it unless you’re downgrading. It’s a competent gamer, and I didn’t find myself tempted to switch over to my tried-and-true when the going got tough in an FPS or strategy game. There seemed to be a tiny bit of latency, but I couldn’t tell if it was in my head or in my keystroke. Again, it’s the kind of thing you won’t notice unless you’re downgrading.

It’s a loud keyboard, though, and that’s something everyone will notice. Blue keys are known for their “click” and the KM-G3 seems to have a hint of rattle to go with it. I didn’t mind it one bit during use – but I learned to type on an old-school typewriter so I’m fine with the cacophony. If you work in a cubicle you’ll want to leave this thing at home.

I was impressed with the key-travel; it’s perfect. If the feedback was a tiny bit tighter – meaning it pushed back against my fingers a little more – I’d say it was too. But, as it stands, the keys feel a touch too soft when compared to more premium models.

It’s worth pointing out that I’m comparing the KM-G3 to keyboards that cost at least twice as much because there’s no point comparing it to cheap keyboards. Aside from a bit of extra wobble in the keys and a funky font, this thing is under-priced. It’s like a UFC fighter who drops down a weight class to dominate. Maybe it’s not so great compared to the Razer Huntsman Elite, but neither is any other $65 keyboard.