Of all the smart home gadgets you can buy, the door lock remains the holy grail. Coming and going without ever touching keys is something we crave for some reason, and August is our best crack at it.

And its new HomeKit enabled lock is supposed to bring something extra to the mix in Siri. Still, the Internet of Things is a mixed bag, but August may be its rare bright spot.

If you’ve seen an August lock, there’s nothing new with the HomeKit version. It still looks like the sexiest, most metal roll of duct tape you can hang on your door lock.

In addition to the lock, August also provided its keypad. The rectangular device is meant for use on the other side of your door, and does exactly what you’d expect: let’s you enter your home using a code instead of a key or the August app.

I should also note installation was insanely simple. You’ll feel like you’re doing something wrong — because a smart gadget should be confusing and complicated, right? — but you’re not. It’s really as easy as taking your inside lock off and putting August on. If you need to manually lock or unlock the door, turning the outside barrel gets the job done. 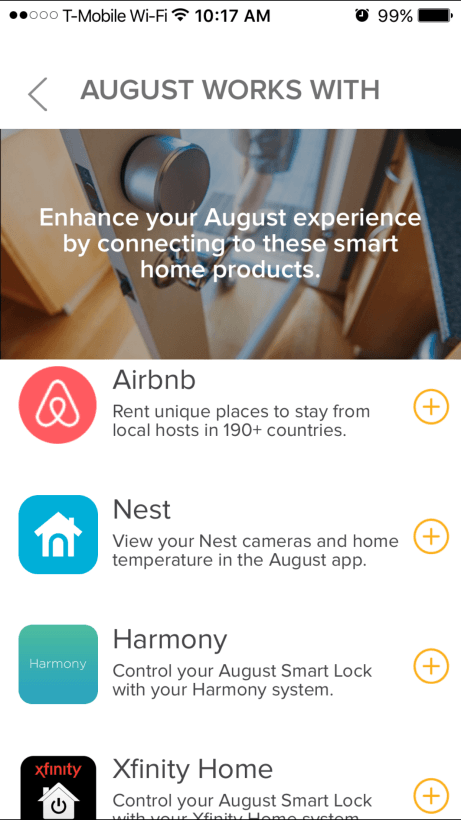 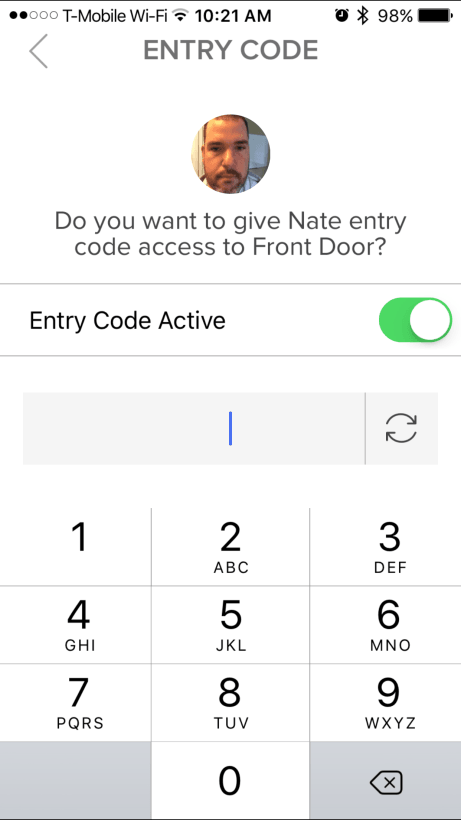 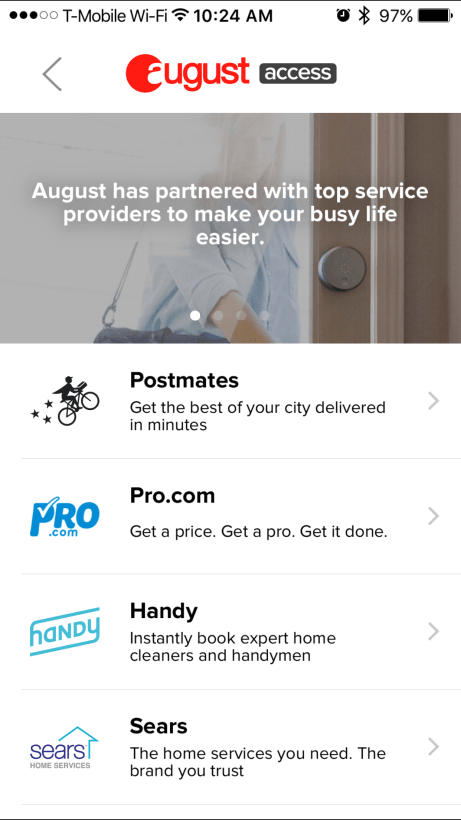 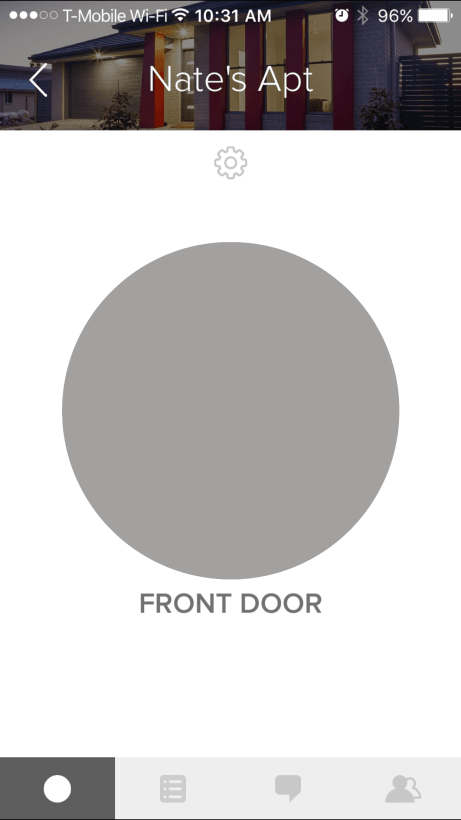 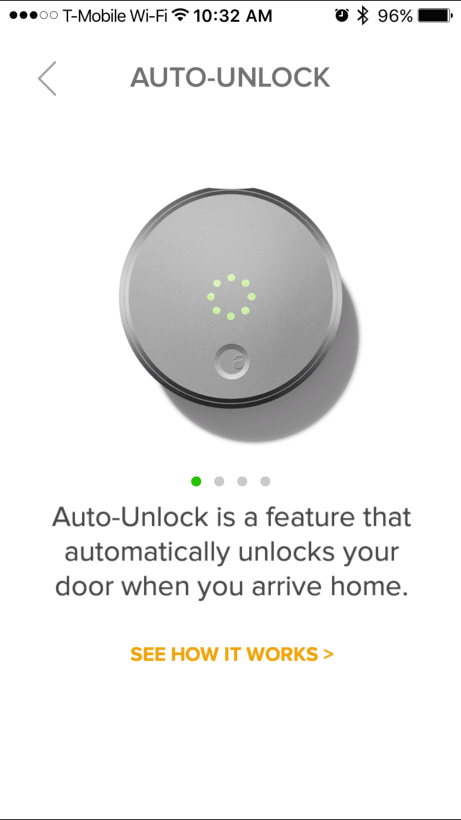 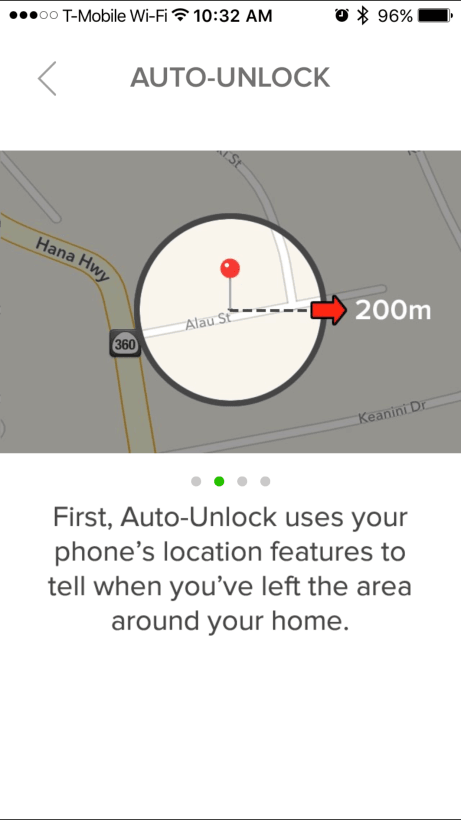 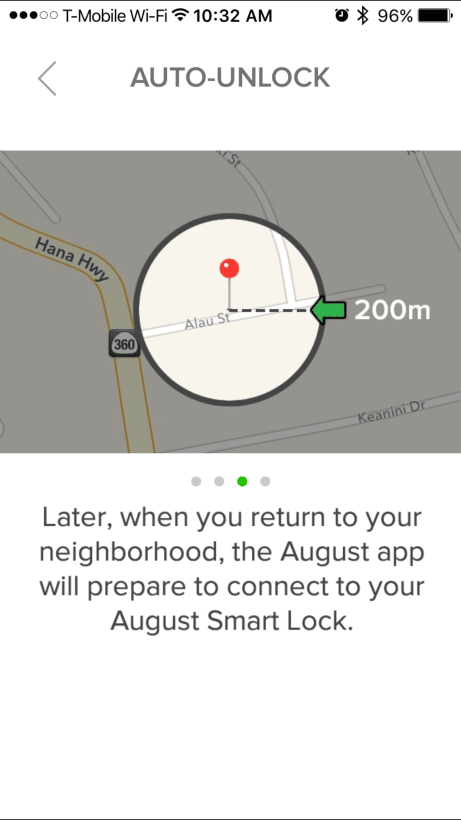 August’s app is nothing to write home about. It’s serviceable for locking and unlocking your door, granting access to new users, or toggling your settings.

If you’re in a dense urban environment with access to a lot of services (so, San Francisco or New York), August also has an ‘Access’ option that lets you grant access to Postmates delivery people or Handy cleaning crews (but be careful, there).

There’s also a guest book if your pals want to leave notes for you after staying over, and an activity log. The app is also where you’ll manage the keypad and smart doorbell, another August add-on for the smart home. And if you’re into wearables, the Apple Watch has a glance for August.

You can have the lock unlock itself when you’re near it, and lock automatically after a set time after it’s been opened. In my case, I have it unlock when I’m within 100 meters, and lock 90 seconds after I unlock it.

When I leave home, I simply close the door behind me and trust August to lock itself. The beauty in that feature is that it doesn’t require connectivity, so I know it’ll happen.

Unlocking is a bit trickier; on a few occasions, the lock doesn’t unlock itself until I’m standing at my front door. Others, it’s unlocked itself when I’m in the parking lot of my apartment complex.

A few times, it’s failed altogether, leaving me to dig my phone out and try the app. The issue there is that the app needs to discover the lock each time you open it, and it’s not always quick. In those instances, keys are faster — and we’re back to square one with the smart home.

You should also be mindful of what you’re asking August to do. If you were to close the front door behind you as you went to mow the lawn — but didn’t bring your phone — there’s a chance you’d lock yourself out of your own home if auto-lock was enabled.

The keypad is also hit-and-miss at times. I’ve gone to enter my passcode only to find the keypad blinking at me as if it had no lock to pair with (even though the app noted it was paired). Other times, it was as smooth an experience as you’d expect the smart home to offer; I enter a code and my August lock twirls to let me into my home. 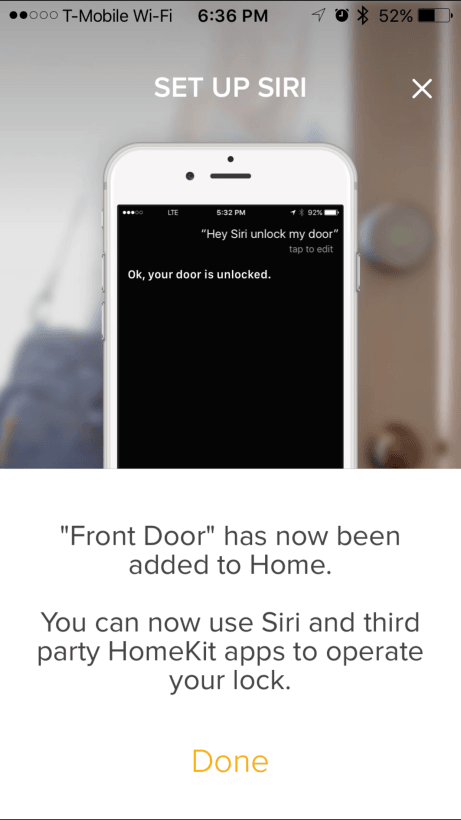 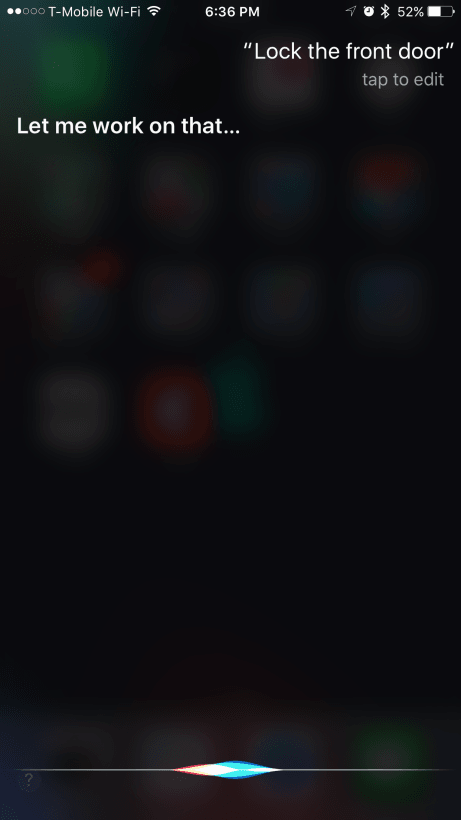 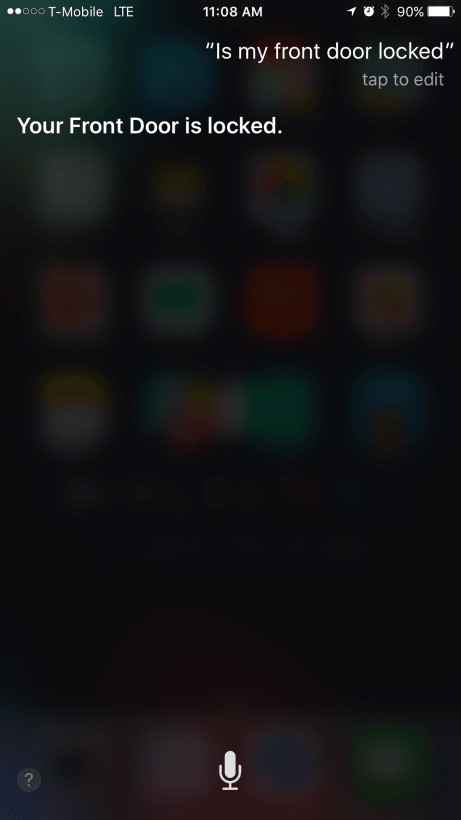 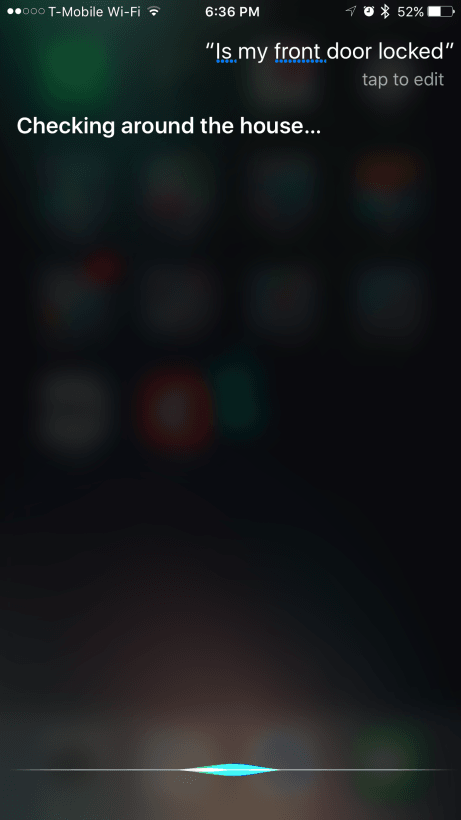 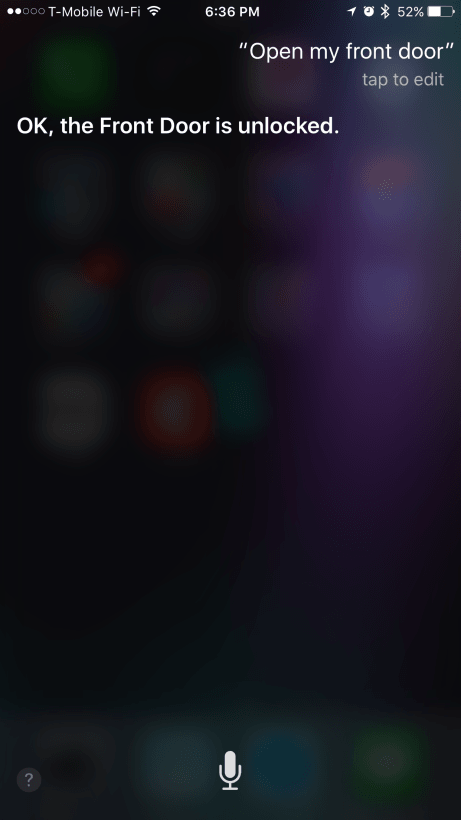 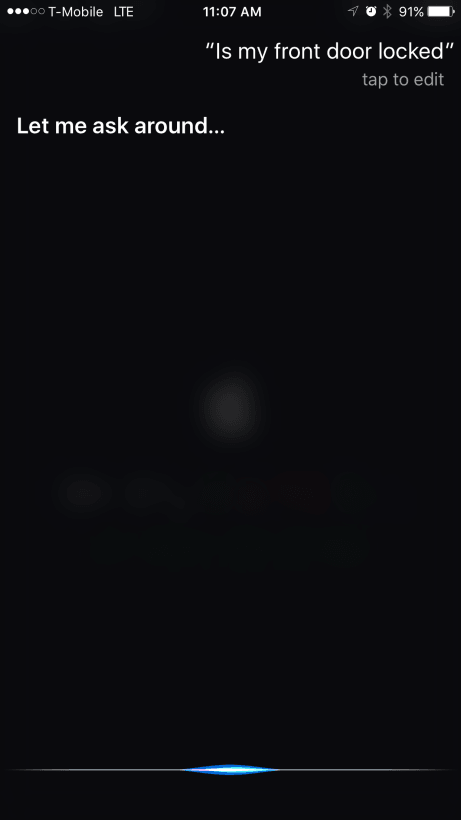 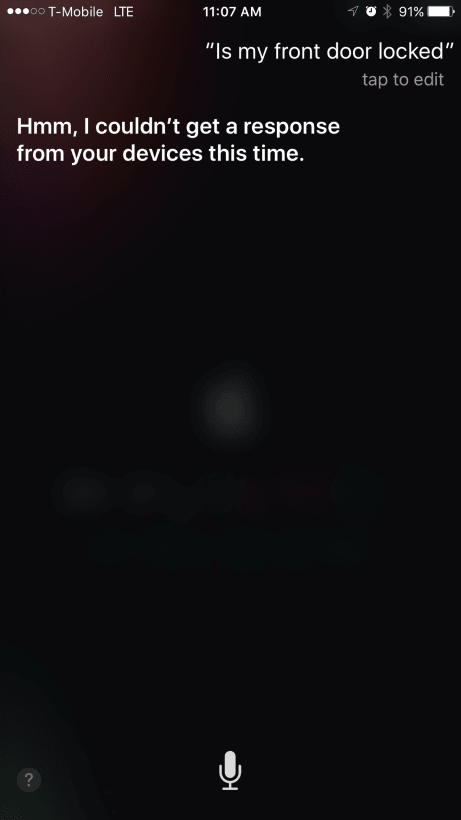 Siri is Apple’s lynchpin for your connected home, so long as you have the new Apple TV, which serves as a hub for the connected home in Apple’s HomeKit framework.

Within the August app, you’ll be asked to name your door lock. Once you do, you can ask Siri things like “is (whatever you named your front door) locked?” which should return a yes or no answer.

You can also ask Siri to lock or unlock your front door — but that’s about it. Sounds simplistic, but what can we really expect of a connected door lock, right?

Outside of your personal needs, there are times this could be handy. Say a friend forgot something at your house, and really needs to get it — but you’re at work. You could unlock the door from afar once they reach your entry, granting them access without giving them a key or disrupting your day.

The August app also keeps a log of when the door was locked and unlocked, so if that friend lingered in your apartment longer than it took for August to re-lock itself, you’d know.

August is still our best stab at the connected door

August isn’t perfect. There were times when it failed to unlock automatically, and the keypad just seemed to be out to lunch. The app also seemed lost when trying to find the lock on a few occasions.

In those moments, it’s clear that connectivity isn’t going to satisfy our desire to have an automated home. As I write this, my service provider (Comcast) is having a major outage in my area, and that jeopardizes some of what August is capable of (HomeKit and August Connect, specifically; the geo-location used for auto-unlock relies on Bluetooth).

I’ve also left my keys at home several times in the process of testing August’s new HomeKit enabled lock and had no problems. But each time, I remind myself that maybe it’s a good idea to hide a key somewhere near my front door just in case.

Happily, those ‘just in case’ moments are sparse. August shines more often than not, and in a strange way its rare failures are how I know it’s a success. I only really think about Comcast as my ISP when it’s down, and I only really consider my connected lock fussy when it fails.

Most of the time (a solid 97 percent, I’d say), August unlocks as I approach it and locks behind me when I close the door. The keypad is less reliable, but has been much better after the latest app update which ushered in HomeKit (and I’m guessing some connectivity tweaks that help keypad work better).

For $229, August is something I can recommend anyway, and HomeKit makes it that much better (if you don’t have HomeKit, August sells a $79 plug-in dongle that links the lock to Wi-Fi, offering the same functionality). Barking ‘hey Siri, unlock my door’ while driving is oddly satisfying.

The ‘wow’ factor is there, too. Friends are impressed enough to lust after August, even when it’s not at its best.

If you need a takeaway, here it is: I test a lot of gadgets, and August is one of the only that doesn’t make me think ‘so what is this thing really good for?’ when I look at it. More often than not it’s just sitting there on my door, reliably locking and unlocking without me prompting it to do a thing.

Which is exactly what I want.

Update: This article was updated to clarify some technological points on August’s auto-unlock feature.