Brick and mortar retail businesses are under immense pressure to innovate now that ecommerce has become a normal part of consumer behavior. Thankfully for retailers, technology can be just as disruptive in a physical store as it can be online.

At the recent DX3 digital marketing conference, self-described ‘Retail Prophet’ Doug Stephens set up an installation to show off the various technologies that can help retail compete with online. Dubbed the ‘Retail Collective,’ the effort aimed to move beyond homogeneous single-brand demonstrations with a collaborative approach.

“I’ve been in the industry a long time, I’ve been to a lot of technology and retail shows, and I’ve never seen anyone put together a tech-agnostic, a brand-agnostic view of the future of retail from a technology standpoint,” Stephens told TNW in an interview. “We put together this elite team of technology companies with the mandate that they had to play nicely together and create an experience that was consistent and immersive.” 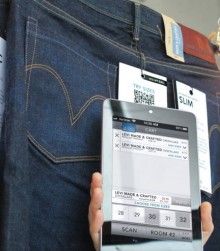 The Retail Collective’s experiment approaches the shopping experience from both the consumer and the merchant perspective. Opt-in mobileID tracking, for instance, offers retailers a chance to see the types of data they can look forward to, while demonstrating to consumers the benefits of personalized shopping.

You can imagine having intelligent notifications about products you might like as you wander through a store. When you’re ready to try something on, you can head to the Magic Mirror to have it show you how the clothes will fit. When you enter the fitting room, a robotic compartment whisks the items over. When you’re ready to pay, you can just use your phone to accept the charges and walk out with your new stuff.

“We’re not trying to put together something that’s just cool for the sake of it,” Stephens continued. “We’re trying to put something together that an executive can walk through and say, ‘Okay, I think I get this now.’”

Stephens created his Retail Prophet consultancy after noticing a lack of foresight in the retail industry. Five years later, many of his initial predictions are beginning to come true. For instance, Stephens projected the unraveling of the big box model of retailing.

“That idea of the whole retail market shifting and the balance of power moving back to the smaller niche and speciality retailers and the internet of course has unfolded and will continue to unfold,” he said.

The end of big box may seem obvious now, but Stephens said that many observers called the idea rubbish when he posed it in 2009.

Looking ahead to the future, Stephens believes retail stores are turning into media outlets. As more consumers browse goods at shops and then go online to buy them, it’s becoming more difficult for stores to directly measure their sales impact.

“We’re going to have to start treating the store experience as a media experience and measure it on the basis of the impressions it generates and how engaging and compelling those experiences were,” he noted.

Stephens believes stores could transition to charging brands an ad rate for displaying their items. Rather than just taking a cut of sales, retailers will serve as ambassadors that participate in a sale even if takes place when the customer gets online back at home. Convincing customers to buy a product in store is no longer just about coupons and foot traffic.

While some have predicted the downfall of retail in general, Stephens remains positive about the industry.

“Software eats retail? I don’t believe that. Software hunts for average experiences in the marketplace and annihilates them,” he said. “It’s a matter of retailers ramping up that experience so that it becomes valuable.”

To get an outside view of the collective’s endeavors, we spoke to FK Funderburke, Senior Director of Omnichannel Experiences at Acquity Group, a part of Accenture Interactive.

Funderburke agreed that, based on what he’s seen, the installation is “right at the front” of where the future of retail is heading.

“Look at things like the Magic Mirror…You’re giving them a concierge like experience,” he said. “What you’ve done is you’ve taken something that used to be routinized and mundane. You’ve brought the power of a digital online experience right into the dressing room.”

“Most people say this is a hard time to figure out what to do. I look at it where this is a place where the future is so wide open that there are a tons of things to do,” he said. “It’s much more of a fun place to be than it is a scary place.”

Similar to Stephens, Funderburke asserted that retailers that don’t innovate and embrace changing consumer behavior will go out of business. However, retailers that can bring together the online and home components in-store will thrive.

“The new reality is customers are always connected. The barrier between physical and digital is gone. With the new innovations coming, you have mass customization. I only have to build one Magic Mirror but it is a unique, personalized experience for every single person that walks in there.”

As merchants achieve a seamlessness between the physical and digital worlds, they’ll be able to create a more powerful relationship with their customers by using data to make content and offers more relevant.

For retailers who balk at the hardware and software costs of integrating new technology into their stores, Funderburke believes “the cost of not doing these things is much higher than the cost of doing these sorts of in-store experiences.”

Considering some of the poor shopping experiences I’ve had at big-box retailers lately – mismanaged inventory, apathetic employees, long  lines and unkept shelves, to name a few – it’s tempting to declare retail as doomed to die at the hands of Amazon’s coming drone army. Still, I fully expect to be walking into stores and buying stuff for many years to come, especially if retailers can see fit to incorporate some of these new technologies.