The tech blog ReadWriteWeb has been acquired by SAY Media, AdWeek reports – information that RWW just confirmed. Following the acquisition, former Business Insider editor Dan Frommer will be joining our friends and competitors as editor-at-large.

Founded in 2003 by Richard MacManus, its current editor-in-chief, RWW had 766,000 US unique visitors last month according to comScore, AdWeek reports. According to the companies’ press release, MacManus will continue to lead the site’s “expanding editorial team”, as Frommer is only the first of several additions to RWW’s staff.

Dan Frommer is a key figure in the tech blogging community. After leaving Business Insider, which he helped create, he had also launched his own tech blog, SplatF, which is also part of SAY Media’s Tech channel. According to AdWeek, “Frommer will continue to write for SplatF as a ‘personal outlet'” despite his new role at RWW. Approached on Twitter by our Managing Editor Brad McCarty, Dan Frommer confirmed this information, stating that “SplatF isn’t going anywhere”. 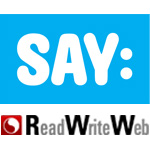 As for SAY Media, it was born from the merger of video ad network VideoEgg and blog technology company Six Apart in September 2010 (see our report). Based in San Francisco, it has offices across North America, the UK and Australia.

RWW is its third acquisition following Dogster and Remodelista – but probably not the last: “the company will continue to partner with, build and acquire sites,” SAY Media said.

“Under SAY’s guidance, the site will continue to evolve through design and user experience innovations that align with SAY’s Clean Campaign vision,” the press release mentions.

“ReadWriteWeb was always about what’s next. As we expand its horizons, it’s too early to say exactly what it’s going to be. We’re going to spend the next couple of months figuring out where it can be the most impactful in the technology space.”

The companies also announced that RWW will “expand its editorial scope to appeal to a wider array of technology consumers.” In other words, the blog would include more cultural and international news, Young declared to AdWeek.

This announcement comes only one month after the blog’s best known editor Marshall Kirkpatrick stepped down from his full-time role to launch his own startup, Plexus Engine (see our post). Earlier this year, ReadWriteWeb had also announced it would cut ties with its international blogs in France, Spain and Brazil.