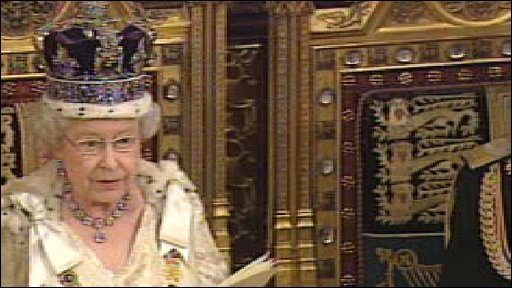 In the Queens Speech today, a multitude of measures were announced to prepare Britains future communication networks and the demands that will be placed on them.  Interestingly, the Government and the Queen also mentioned the targeting of ‘persistent’ illegal file sharing offenders.

According to the Government , the plans will ‘ensure communications infrastructure that is fit for the digital age, supports future economic growth, delivers competitive communications and enhances public service broadcasting’.

Now that sounds all well and good, though my analysis of the plans to improve the UKs broadband infrastructure last month ended in a severe anti-climax at the prospect of being guaranteed a meagre 2mb line by 2012.

Unsurprisingly, with a general election looming for the Labour Party next Spring the mooted tax for this ‘next generation’ broadband network wasn’t mentioned.  Other initiatives included:

Targeting illegal file sharers has drawn criticism, especially as there has been an inconsistency in penalties in recent times.  A case up in Hull, where ISP Karoo shutdown a user for persistant abuse.  The user was then re-instated after signing a release promising not repeat offend which leaves a policy varying from ISP to ISP.

If the UK is to take a hard line on file sharers, we need to fast track the measure due to come in, in 2011, now.  At current, abusers are simply sent letters and idle warnings by ISPs and this is clearly not enough.

The significance of the measures announced today will hopefully be discussed in greater depth, though the immediate future does appear bleak for the UK with ominous policies on the next gen broadband network and illegal file sharing.