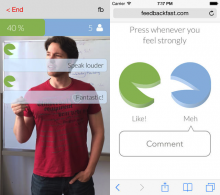 In December, an Australian team launched an app that was meant to allow people to get anonymous feedback from their audience during a pitch or presentation.

Unfortunately, it was released with a name that just made people’s minds wander elsewhere: Intercourse.

“Since then we’ve seen a lot of feedback from people who love the idea, but were concerned that directing their audience to ‘myname.intercourse.io’ would distract from their presentation,” Murray Hurps, one of the founders of the app, says in a blog post.

Well, mere concern seems to be understating the problem here. The team has now changed the name of the app to ‘Feedback Fast’ and relaunched it on the App Store — and is offering the app for free for a limited time (it’s typically priced at $0.99) as “penance for the trouble.”